In this issue we shall be describing a really beautiful bonnet and also some indoor caps from among the many treasures in Yeovil Museum. 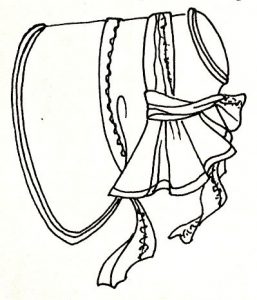 1 – This bonnet is very large and is made in a coal-scuttle shape. It measures just over teninches from the front of the brim to the tip of the crown and twenty-six and a half inches from side to side. It is constructed from fine white cardboard, quite a usual material at this period, the tip of the crown is made of stiffened canvas. The crown and brim are cut and made up separately, although this is not strictly necessary as they both continue in one straight line from front to back, and other bonnets of the same shape are made in one piece.

The entire hat is covered with a light fawn satin material. The brim is wired all round the edge and is trimmed with a narrow folded  crossways strip of the same material, about a quarter of an inch wide, sewn on the outside edge. A line of piping joins the tip of the crown to the side band, which is wired at the neck edge. A three and three-quarters inch curtain or bavelot hangs at the back of the bonnet, this is edged with a folded cross­wise strip to match the trimming on the brim.

The bonnet lining is made of white glazed linen, only attached round the headline. It has no draw-string, as is usual, and the hem is too narrow to take one. The canvas at the back of the head is not covered, and there are no stitches or pin holes to suggest that it ever had been lined, although the careful workmanship throughout is good.

It is very fortunate that the bonnet has all its original ribbons. This is not very common with hats of this period, and it adds to its value which, in any case, is quite considerable. The material of which the ribbon is made is very fine, slightly stiff taffetta and gauze in a matching shade of fawn. The width in all is two and a half inches, the gauze edge on one side is half an inch, and both edges are finished with small picots. Where the taffetts joins the gauze, it is patterned with single three-lobed leaves in alternate colours of pale mauve and white with yellow outline and stems. But the ribbon has so faded over the years that this is only just visible under the folds at the back. The trimming covers the join of crown and brim, and extends downwards to form the strings. Another band of ribbon is round the middle of the crown and across the back is a third folded piece covering the raw edge of the curtain to neaten everything off. A large bow decorates the right side.

The dating of this specimen is a little difficult. In ‘Costume Reference No.5’ by Marion Sichel, dealing with the period 1899-1830 and published by Batsfords in 1978 there is a drawing showing a woman in the costume of about 1806, carrying a very similar hat. The provenance of the sketch is not given, so that it is not possible to check the artist’s dates, nor the date of the subject of the portrait. However, as mentioned before, we have seen other bonnets made in this particular style, and compared with these specimens, we find that the hat now under consideration has one outstanding difference, a difference in size. These other examples measure from front to back eight inches and from side to side twenty-one inches, and therefore they are very much smaller than the fawn satin hat which, in actual fact, looks enormous beside them.

The smaller bonnets are dated by comparison with fashion plates, which is a very reliable method to use, and are shown to be about 1843-5. The approximate date given by Marion Sichel is about 1806-10 making a difference of forty years between two almost identical styles.

It seems, therefore, that in outward appearance size alone distinguishes between the designs of these two periods, there are, however, a number of technical differences shown in the making up which point to other times, so, in consequence, we may now place this fawn satin bonnet firmly in the first decade of the nineteenth century with a fair amount of confidence.

2 – The second item is an indoor cap of 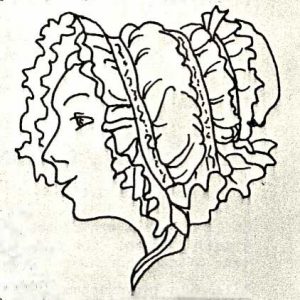 about the same period as the last item. It is made of fine sprigged muslin, probably hand-embroidered. The cap consists of two rows of two-inch wide muslin, gathered on each edge between three rows of hand-embroidered, one-inch wide insertion placed from side to side. The back of the cap, which measures 8½ inches by 8 inches, is gathered on to the band of insertion and finished with frill, made from very fine plain muslin an inch and a half wide and edged with a very narrow bobbin lace, probably torchon. The front of the cap has a double frill two inches wide made of the same materials, and a single frill continues all round the bottom of the cap. There are two plain muslin strings eight inches long and two inches wide, hemmed with a very narrow edge and invisible stitches, the ends are rounded. This cap looks extremely charming when it is worn, and was probably very fashionable. 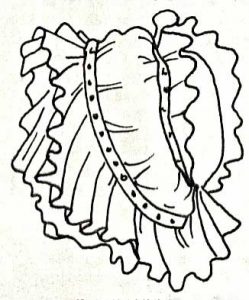 3 – The second indoor cap is again of the same date as the first one and is, perhaps, even more charming on a head. The bonnet is made of a very fine white cotton material with a minute check in a thicker thread, possibly a gingham. The main part of the cap consists of two rows of material, as before, but cut on the cross. It is three and a half inches wide and is set between three rows of hand-embroidered insertion half an inch wide. The ungathered back piece is oval at the top and cut off square at the bottom. It is six inches high by four and a quarter wide. There is a narrow band one inch wide on the front of the bonnet, this carries a frill at each edge. The frill is of fine plain muslin two and a half inches wide, with a very narrow lace edge about one‑eighth of an inch wide, probably needle run on a machine-made net. A single frill to match is sewn all round the bottom of the cap, but there are no strings.

Inside the cap are three pairs of narrow one-eighth of an inch linen tapes. One is attached to the top of the back piece and one each side half way down, the corresponding tapes axe attached to the middle row of insertion. When tied together, these tapes fold the back part of the crown into an upstanding frill towards the back of the crown. There is also a draw­string at the bottom of the cap. This would have been a morning cap.

4 – This third indoor bonnet is a very unusual one, 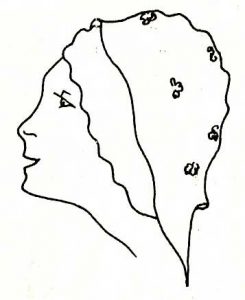 and it seems impossible to date it with any accuracy. The material of which it is constructed is a fine muslin, hand-embroidered with coloured sprigs about four inches apart each way, set in a diaper pattern. It has clearly been made from a larger piece of muslin as the sprigs have been cut at the join down the centre back. It is cut from a straight piece of material, folded in half and joined down the back and Lathered together at the top. It comes down each side of the face and finishes in a small point. There is a very narrow hem all round.

The style is that of the seventeenth century, but without a firm turned-back front edge. The embroidery is similar to that on an early eighteenth century apron in the museum, a very fine chain stitch placed close together, and is done in four colours.