AN ‘OPPIDUM’ OF THE DUROTRIGES AT ILCHESTER

New discoveries in archaeology are not infrequently associated with freak weather conditions and their effects. Parch marks resulting from prolonged drought are an obvious example, but it is rare for quite opposite conditions to be of use. However, severe flooding at Ilchester in December 1979 led to one such discovery, the potential of which was only fully realised in October 1984.

Air photography under flood conditions, field survey, and observations made in the sides of fortuitous, if destructive public service supply trenches, demonstrated the existence of a large semicircular earthwork enclosure within the meadows immediately south of Ilchester. With the aid of a generous grant from the Maltwood Fund of the Royal Society of Arts, a small team from the Western Archaeological Trust and the University of Bristol were able to sample this site last autumn. Several possible theories to account for the site’s existence were postulated, but following our work it would now seem that a more definite and potentially exciting explanation can be offered.

Excavations in 1984 and earlier observations suggest that a very considerable earthwork enclosing at least 16 hectares occupies the river flood plain meadows south of Ilchester; its south east side possible bounded by an old abandoned course of the River Yeo. Elsewhere the enclosure was defined by a broad clay bank and a wide outer ditch, together occupying a zone 25-30m. wide. The broad shallow ditch is largely waterlogged, with great potential for organic preservation. The bank, composed largely of clay, was fronted by a low drystone wall revetment, composed in part of Ham Hill stone. Although still visible in places as a low earthwork, slumping of its clay body and partial burial beneath subsequent alluvial flood deposits had disguised the course of both bank and infilled ditch, preventing their earlier recognition.

Inside the enclosure extensive occupation deposits evidently exist at several locations immediately behind the rampart. Where sampled these have produced a wealth of late Iron Age pottery, slag, and animal remains, some of the former evidently originating from Ham Hill. 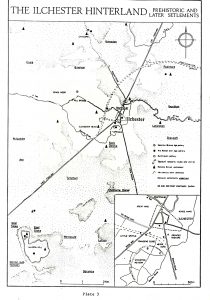 Interpretation of this site as an ‘oppidum’, a class of late Iron Age settlement with some proto-urban attributes, more familiar in south eastern England, rests upon several considerations. Its apparent date, morphology and location, both geographically and. politically, all argue in favour of such an interpretation. Low-lying, weakly defended positions, often with direct access to navigable rivers,frequently characterise these sites; within which a variety of social, industrial, and economic functions may be concentrated. Furthermore, the relationship of this site with Ham Hill, and with the later site at Ilchester, both at different times playing a dominant political and socio-economic role within their region, suggests a similar if short-lived role.

Oppida seem to represent changes in the organisation of late iron age society in Britain and the increasing centralisation of authority within tribal regions, leading ultimately towards urbanization. In Britain this process was suddenly accelerated by the imposition of Roman authority and culture. At Ilchester it cannot be a coincidence that the suggested ‘oppidum’ site, representing as it does an organisational shift away from the pre-1st century AD. hillfort dominated Durotrigian territorium, lies so close to its Romano-British successor. Roman Lendiniae, although never attaining the size of other cantonal capitals in Britain, has nevertheless been interpreted as one such centre. Whatever its precise status, Ilchester’s function as a regional administrative and economic centre for a wealthy region of Roman Britain can hardly be doubted. The discovery of such an ‘oppidum’, despite the apparent backwardness and reluctance of the Durotriges to abandon their hillforts in the decades prior to the Roman conquest, only conforms to a widespread pattern now emerging more clearly in southern Britain. Its discovery provides further confiirmation of the potential status and importance of Roman Ilchester as a cantonal capital of the Lendinienses.

Further work during 1985, subject to support from the Maltwood Fund, may reveal clearer information of activities, status, and the material culture of this site. For the future its long term preservation and protection from disturbance must be a high priority.
P.J. Leach.