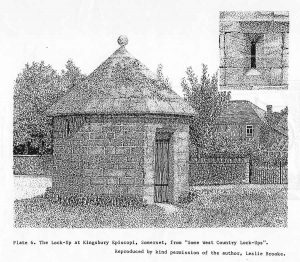 ILMINSTER – Masons have been engaged during the past week in pulling down the Round-house – a very ancient building standing nearly in the centre of the town. The New Police Station, in the house lately licensed as the Grapes Tavern, renders the old Round House of no further use as a ‘lock up’. –

BOOK REVIEW – “Some West-Country Lock-Ups”
After a long incubation period Leslie Brooke’s latest book “Some West-Country Lock-Ups” was finally published in August by Fox Publications Ltd. The book is attractively produced in hard back with 62 meticulously produced pen and ink sketches by the author. It is a worthwhile acquisition for the splendid drawings themselves but it is more than that, because of the comprehensive nature of this survey of Lock-ups in the counties of Avon, Cornwall, Devon, Dorset, Somerset and Wiltshire. Although the introduction includes a plea for notice of Lock-ups that Leslie Brooke has missed, I suspect that this would prove something of a challenge. The brief but informative text makes fascinating reading with numerous anecdotes such as the legend that the distinctive shape of the Castle Cary Lock-up provided the pattern for the police-mans helmet! One nice point concerns the layout in which the county of Avon is set between Somerset and Wiltshire. This is not an oversight but a quite deliberate geographical recognition that Avon is, in effect, a sub division of Somerset for the purposes of any historical survey such as this. Although the subject matter is to say the least unusual, “Some West-Country Lock-Ups” is highly recommended and to whet the appetite of would-be purchasers one of the illustrations is reproduced on this page. Copies are available from Fox & Co. in Yeovil at £7.95.