This article came from the Chronicle published April 1987. Page: 127. 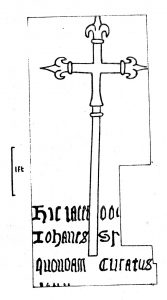 The interesting medieval grave stone shown here is to be found in the floor of the chancel of Mark church. It does not appear to have attracted any previous comment but is important because the incised lines are filled with lead. Such monuments would have been very vulnerable to subsequent damage and, therefore, it is a rare survival, possibly the only pre-Reformation example in Somerset. The black letter latin inscription would probably have been as follows :-

The surname is hidden but it may be possible to identify the deceased from existing records. From its style, the monument probably dates from the late 15th century.