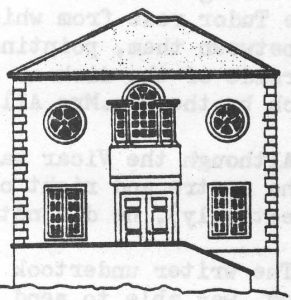 This is the first appearance of “Museum Gallery”. It will keep you up to date with news of the Museum and it is hoped will become a regular part of Chronicle. The Museum, is currently undergoing a period of great uncertainty, some of which you will have gathered from the local press. Proposals were made that the Museum should become the responsibility of the Town Council, instead of the District Council. The arrangement was at first approved in principle but the District Council is now having second thoughts. Within the organisation of the Museum, the greatest change is undoubtedly the retirement of Leonard Hayward as Leader of the Working Party. The Museum has been without a Curator since the re-organisation of the local government structure on April Fool’s Day 1974. For the intervening years Leonard Hayward has co-ordinated the activities of the Working Party, acting as Curator in all but name. It is no exaggeration to say that without his untiring work the Museum would long since have ceased to exist. I am glad to be able to report that Mr.Hayward will remain associated with the Museum.

Turning to the more visible side of the Museum – its displays, there have been a number of changes. The most striking new display is that of the club brasses – described on page 128.

The costume display is regularly changed with two Victorian dresses currently on show. A variety of shawls and capes have been included to demonstrate how the Victorian lady managed to keep warm. Most recently, the Boys Brigade have loaned the Museum the collection of silver trophies awarded at the annual camp of the now disbanded Wessex Battalion. These include some very handsome items such as a silver bugle and a detailed scale model of a tent. The trophies have been put on immediate display in the lower gallery. A number of notable donations have been received, such as a remarkable collection of Roman finds newly discovered in the area which includes 27 coins and the bowl of a bronze spoon very close in style to the silver replica on sale. We have also been given a carved stone clock made by Mr.Childs, early in this century or late in the last. It is carved from a clock of fine Portland stone, on a base of imported marble and takes the form of a blank gothic arch with pinnacles, crockets, running foliage and two exquisitely carved heads.

The Friends of Yeovil Museum have invested in the purchase of a selection of items for sale in the Museum. It is this that has occasioned Chronicle’s first venture into advertising, printed prominently on the back cover. Come and see for yourselves the changes in the Museum – why not buy your birthday presents at the same time?

As you can tell from this brief report, the Museum is not only alive but definitely kicking.