This article came from the Chronicle published October 1987. Pages. 19-20

The G.W.R. Yeovil to Taunton branch line began at Pen Mill Station, then making a short run to Town Station, which it shared with the London & South Western Railway. The Great Western had passenger facilities only, the L. & S.W. had a good depot and sidings and an engine shed where main line engines were serviced. It had a passenger service via the spur line to Yeovil Junction on the main London Exeter line. Yeovil Town station was built in 1860 when the Salisbury Exeter portion of the L. & S.W. was completed, and was demolished in the 1960’s when the Beeching cuts closed the Taunton branch line. The G.W.R. line was single line track as far as Durston, where it joined the main line from Bristol to Taunton, but there were passing loops of double track at Martock and Langport West stations, both of these places having busy goods depots and sidings.

Seventy years ago, during the last years of World War I, I travelled regularly between Yeovil Town and Langport West stations. In those pre-nationalised days the rolling stock, stations and staff were all G.W.R. The trains used on this branch were made up of old type four or six wheel non-corridor coaches, finished in the standard Great Western chocolate and cream, and despite their age and war-time shortage of staff, would put to shame current B.R. stock for comfort and cleanliness. Motive power was usually a small tank engine of either 2-4-0 or 0-4-2 type, goods trains being worked by “saddle tank” 0-6-0 type engines. Although fairly old these engines were kept clean and tidy, in contrast to the uncared for engines of the 1950-60 decade. 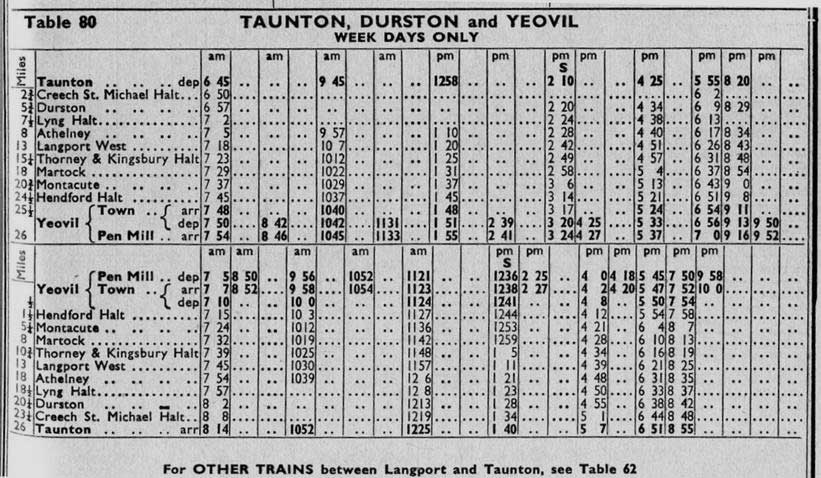 On leaving the Town Station, Summerhouse Hill rose on the south side of the line, with Constitution Hill merging with the woods of Nine Springs much as it does now, but the view on the north or town side of the line is now very different. There was then a stream, now vanished underground for much of its course, bordered with many leather tanneries and glove factories, Blake & Fox, Ewens & Johnson, W.J.Ricketts, and Clothier Giles among others. From the train one could often see men in overalls and thigh boots dipping the skins in the tanks of liquid used in the dressing process. Between the factories and distant Penn Hill were many streets of red brick terraced houses. Leaving what was then Yeovil’s industrial area behind, the train entered a cutting, passing under the Hendford Hill road bridge, along the parapet of which, in the early years of the century, a well known townsman once rode his “ordinary” bicycle for a bet. Hereabouts, in a garden beside the railway, the gold “tore” now in Taunton Museum was dug up. Beyond the cutting, spur lines led into the busy sidings and sheds of the G.W.R. goods depot, the main artery for goods in and out of Yeovil and the surrounding villages in the days before long distance road transport. This site is now occupied by the Bradfords and Burts depot. Hereabout too, on the eastern side of the line, was a weed-grown platform and a small derelict building which had been the Yeovil terminus of the Bristol & Exeter Railway, who were the original builders of the branch, being taken over by the G.W.R. sometime in the 1860’s. This building was opened up for a short while after World War 2 as “Hendford Halt”. A short distance beyond the goods depot was the Bath and Portland Stone Co. works, with its own siding, where one could see and hear big circular saws cutting huge blocks of stone into various shapes. The railway track then bore westwards to follow the course of what is now Lysander Road, with the recently built Petters Ltd. foundry and oil engine works and the Westland Aircraft to the north of the line, with numerous private sidings. These sidings always seemed to be busy with trucks being shunted around by a little diesel loco, and sometimes there would be glimpses of an aircraft on the runway beyond the factory buildings. The land to the south of the railway was all part of Yew Tree Close Farm, now entirely covered by the Forest Hill and other building estates. Beyond the Westland buildings, on the south side of the line, at the bottom end of Bunford Lane a factory had been built by the Government in 1916 for the processing of flax. Until the mid 19th century flax had been grown in quantity in south Somerset, the fibre being used by the rope works at Coker, Martock and Bridport, and the sail cloth mills at Crewkerne. The growing of flax had died out due to cheap foreign imports, but the demand for fabric to cover plane wings and fuselages and lack of imported fibre led to the need to revive this local industry. However, it soon died out after the war, and the building was then taken by Aplin and Barrett as a milk depot.

Passing under the bridge which carried the Odcombe and Montacute roads over the railway the train soon arrived at Montacute Station, a single platform halt, but often a busy one, as it served not only Montacute, but also the villages of Tintinhull, Odcombe, and Stoke-under-Ham. Leaving Montacute the train passed under what is now the A303 Ilchester-Ilminster road on its way to Martock then under a bridge carrying the road from Martock to the village of Ash. By this bridge was a field used by one of the Martock glove factories, skins to be dried after the dressing process being hung up on lines. Martock station was a busy one, serving the agricultural areas of South Petherton, Kingsbury and Long Sutton both for passenger and goods traffic. At this time, there were no local bus services and few private cars, the railway was the only link with the outside world. Martock goods depot was very busy in those war time years. The sidings would be full of trucks carrying wheels for guns and timbers from Sparrows of Bower Hinton, tents made by Paulls, and sectional wooden huts made by Hebditch’s. Martock also had a thriving regular cattle market. Animals which were not bought locally all being moved by rail in purpose built trucks.

The next station was Langport West, the halt at Thorney being made at a much later date. In winter after heavy rains the flat land between Thorney and Langport was often flooded, sometimes the water even covered the rails so deeply that trains could not run in case the fireboxes were under water. Many times I saw the rails between the platforms of Langport station completely covered. Langport West was a station with a heavy goods traffic both in and out to serve a large agricultural area, there was also considerable amount of war time traffic to Westlands as many small workshops in Langport were busy making airframe parts. I remember the local undertaker showing me the framework of rudders and elevators he made. Langport was served by another G.W.R. station, Langport East, on the main Castle Cary to Taunton line, but it had no goods facilities. The Yeovil – Taunton branch line was closed in the 1960’s.