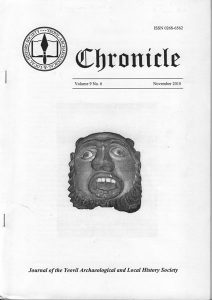 Front Cover Illustration:
Devil’s head roof boss from the knave of St John’s, photographed during the recording of the roof bosses in March 2010. (Photo B & M Gittos)

This article came from the Chronicle published November 2010

‘Cross in the churchyard; C15, clearly re-cut in the C17. See the drapery of St Michael, the swags on the plinth of the figure, and the ball-finial on the cross.’

With these words the first edition of Pevsner’s Buildings England: South and West Somerset dismisses the churchyard cross at Drayton (near Muchelney).1 Was he right? 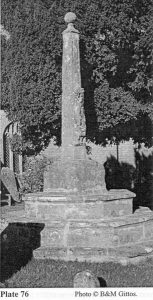 The cross in question (see Pl. 76) stands within the churchyard on the south side of the church and is carved from Ham Hill stone. It stands in its socket, a substantial block of stone, atop a stack of three graduated steps, and these are also cut from Ham Hill stone. The shaft is made from two long pieces of stone, set on end, and is topped by a ball sitting on a moulded cap. The corners of the shaft have been carved into attached square-section shafts and between them, each face of the shaft has been very slightly dished. The only addition decoration is on the south face where a boldly carved figure group is (now) the dominant feature of the entire cross.

The group is carefully designed and executed to be within the width of the shaft but the vigour and coherency achieved converts what could have been a flat and lifeless composition into a considerable sculptural achievement. The central figure of the group is a representation of St Michael, his wings neatly folded behind him but with his right, sword-wielding, arm raised to strike the lethal blow across the neck of the wyvern on which he tramples. His right foot stands on the wyvern’s back but his left steadies the neck for the blow. The wyvern himself, meanwhile, with his tail curled up around St Michael’s legs, bites the bottom of the shield in St

Michael’s left hand. Over St Michael’s head is a fine nodding ogee canopy with, in view of the space available, just two leafy crockets. It once had a finial as well but this has been lost. Below the fight is a bracket and kneeling below it are two figures, their hands raised in supplication.

So what can be made of all of this? The two donor figures are what Pevsner interpreted as ‘swags’ but rather than being a seventeenth-century stylistic feature, they are recognisably dressed in later fourteenth-century style. Their hands are raised in prayer and these are representations of the people who paid for the cross. The drapery of St Michael is acceptable for the fourteenth-century and so the only later modification appears to be the replacement of the original cross head with a ball finial. The is a series of medieval churchyard grosses in Ham Hill stone with figures carved on their stems. In Somerset, other examples are at Barton St David, Bishops Lydiard, Broadway, Crowcombe, Heathfield and Montacute. The last of these has a donor figure on the south face. The crosses are mostly weathered and damaged. after centuries of exposure to the elements but there is no doubt that the Drayton cross was one of the most well executed and is also one of the best preserved. Julian Orbach, who is editing the revision of the Pevsner for the area, has already drafted an appropriate revision.