Entries in Yeovil St John’s churchwardens’ accounts for 1541 recording the acquisition of a lectern do not appear to have been noticed by previous writers. The relevant extracts read:

The fact that the ‘Dexte’ was ‘skowred’ while still in London, shows it was in need of cleaning when purchased, and suggests it had been ‘in store’, or out of use, for a while. That St John’s churchwardens were aware of its availability in London suggests, too, that it was being sold by the Crown Commissioners following Henry the Eighth’s dissolution of monasteries and, furthermore, the strong possibility that this lectern once graced the Abbey of St Saviour, St Mary, and St Bridget of Syon which, like other religious houses, had been suppressed only a short while before. Yeovil’s churchwardens, because the Abbess had owned the rectory and had taken the great tithes, might well have been aware of the lectern’s existence, and were anxious to acquire it.

When exhibited at the Victoria and Albert Museum in 1930, on the occasion of an exhibition of English Medieval Art, it was stated that the knob surrmounting the desk was a 17c addition ‘probably replacing the figure of a saint’. The half-figure of a monk which appears on both faces of the book-rest has the face erased in each instance, the churchwardens recording the occasion in their accounts for 1565 with this entry:

The inscription beneath the figure reads:

which has been translated: Come make your petition from this place with humble prayers now I pray. And may Brother Martin Forester awake in the blessed life.

Composed of brass it consists of a large, well-graduated pedestal of five concentric mouldings, the base resting on four projecting arms, on each of which is a lion sejant. The triangular ends of the book-rests have circular openings in the panels to accommodate scrolls. The figure of Brother Martin is is habited in a gown with full sleeves and a hood or cowl. The hands are raised in prayer. It would seem appropriate, if this quite rare example of a medieval lectern was made by a brother of the abbey and convent of Syon, that it should now grace the parish church which had such close ties with it for some 130 years. 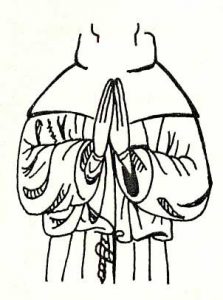 The Abbey and Convent of Syon, founded by Henry the Fifth in 1415, had been endowed with the Rectory and Lordship of Yeovil by the king five years later, St John’s then becoming a vicarage. The Order moved to the site of Syon House at Isleworth, Middlesex (close to Kew), in either 1451 or 1432. Henry the Fifth’s charter allowed for 60 nuns, including the abbess, and for 13 priests, 4 deacons, and 8 lay brothers, and the first novices were professed in 1420, the year in which it was granted Yeovil’s rectory and lordship. In 1428 there were 41 sisters, 7 priests, a deacon, and 6 lay brothers.

One of the priests of the abbey was executed on 14 May 1535 for refusing to take the Oath of Supremacy. Following its suppression, the abbess, 51 nuns, 4 lay sisters, 12 religious men, and 5 lay brothers, were granted pensions. Many of the nuns left England and entered Dermond, another house of the Order in Flanders, returning when Syon was refounded by Queen Mary in 1557. After her death they again retired to the Continent, keeping regular conventual life which has continued to the present day. The present abbey in this country is now at South Brent in Devon. Richard Reynolds, who was executed in 1535, was canonized in 1970.

Nun’s well, which was at the foot of the lower steps leading into the churchyard from Silver Street, commemorated the conventual sisters, while the seventh boss from the east in the nave of St John’s church, appears to be the representation of an abbess.