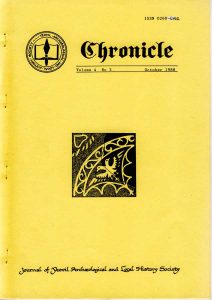 This article came from the Chronicle published November 1988.  Page 79

This 13th C military effigy now lies in South Petherton church. It was discovered in 1929, in Pitway, when a hole was being dug for a petrol tank. It was described in S&D, N&Q, Vol XIX part CLXI, p217 and in the Somerset Proceedings, Vol LXII p 46. The heraldry appears to identify the figure as Sir Philip D’Aubini (died 1294) but it may, alternatively, represent his brother, Sir William (died 1285). It shows several unusual features, the flaps of mail which protected the face and the coif laid back on the shoulders. The figure is sword handling and straight legged, with the feet resting on a beast of which only the paws remain. It is carved from oolitic limestone (probably Doulting). Where are four holes drilled from underneath and several notches in the edge of the slab, which could have taken ropes for raising it, when found. It would probably have been brought via the Rivers Axe and Parret. We visited the church on the 8th October 1988, accompanied by Jerry Sampson, the Archivist of the West Front of Wells Cathedral. He examined the figure and found minute traces of the original colour still remaining. In order to record this important evidence, this illustration has been prepared with the colours indicated. Unfortunately, no colour was found on the charges, on the shield and so the doubts about the heraldry were not resolved.