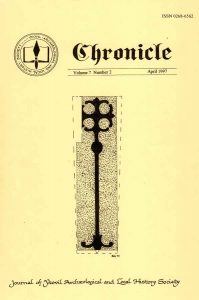 Front Cover Illustration: A mediaeval grave cover in Lufton Church, sandwiched between the base of the font and the south nave wall, and partly covered by a pew. It probably dates from 13th century and would originally have been coffin-shaped. It apes the style of the Purbeck Marblers but is made from local Blue Lias.

This article came from the Chronicle published April 1997.  Pages 31-32

HE ‘DYED’ IN THE KING’S SERVICE

Today Poyntington, near Sherborne, and its church lie quietly in a secluded valley, sheltered by steep hill sides, but in 1645 this rural peace was shattered as one of two painted memorial plaques on the wall of the south aisle of All Saints testifies. One of the plaques commemorates the lord of the manor, Sir Thomas Malet, and the other remembers his second son, Baldwin. Sir Thomas Malet was a judge, prominent in the service of king Charles I, and, following the defeat of the Royalist cause, was imprisoned in the Tower of London, where he languished until the Restoration of Charles II when he was released. There is a story that, during the Civil War, his wife, Lady Malet, suffered the indignity of having her wedding ring taken by a Roundhead trooper and, as a protest, she wore a ring made of horn until her death.

The memorial to Baldwin Malet bears a coat of arms and the following words:

`Baldwin Malet, second Bonne of Sr Thomas Malet dyed in the Kings Service the 3 day of June An: Dni. 1646 in the twentieth yeare of his age’.

There is a mystery about Baldwin’s memorial. The Parish Register, much decayed but still decipherable in the Dorset Record Office in Dorchester, shows that the date of the burial of Baldwin Malet was on the 3rd June 1645 and not 1646 as shown on the memorial. The explanation is probably a perfectly ordinary one and was a mistake by the craftsman or the sponsors when the memorials were made, following the death of Sir Thomas in 1665. It is unlikely that Baldwin’s memorial would have been crafted and displayed during the Commonwealth of his father’s enemy, Oliver Cromwell.

By June 1645, the Civil War had reached a crucial stage and, although most of the west country was in Royalist hands, a number of Parliamentary garrisons still held out, including Taunton, which was withstanding a savage Beige conducted by Lord George Goring. In April, Parliament’s recently formed New Model Army, commanded by, Sir Thomas Fairfax, advanced west to relieve Taunton and by early May was in Blandford, poised to advance north. However, on 7th May, Fairfax was ordered to join Oliver Cromwell to engage the main Royalist army, which had left its stronghold at Oxford and had begun to campaign in the Midlands. Six regiments were left in Dorset and by early June they were occupying the Chard area, waiting to relieve Taunton.

At this time Sherborne Castle, some three miles from Poyntington was a Royalist stronghold and a major influence on the district, including the local `Club Men’. The ‘Clubs’ were springing up in many parts of a country, now weary of three years of war and its attendant destruction, and were formed by local people seeking to protect their towns and villages against the depredations of both sides. In Somerset, the ‘Club Men’ were anti-Royalist, following the activities of Lord George Goring’s army, but in Dorset and in the Sherborne area, they came under the strong influence of the Royalist gentry and churchmen. The Dorset ‘Clubs’ were prominent in attacking Parliamentary troops and their lines of communication throughout the county.

The story of Baldwin Malet recounts that on 2nd June 1645, a body of Parliamentary soldiers was moving north through the area in the direction of Wincanton, possibly en route to join Fairfax and Cromwell, when the Royalist villagers of Poyntington attacked. Baldwin is reported to have arrived at the scene of the fight fully armoured and, leaping his horse over a gate, charged into the middle of the Roundheads. After killing some twenty of his enemies, he was hacked down and slain; Baldwin’s corpse was returned to the manor house just an hour after he left it and was buried the following day for fear of plague breaking out in the summer heat.

The scene of the battle, adjoining the road to neighbouring Oborne, is reputed to be haunted by headless soldiers and a headless woman – a camp follower, perhaps?