This article came from the Chronicle published November 2005.  Pages 15-18 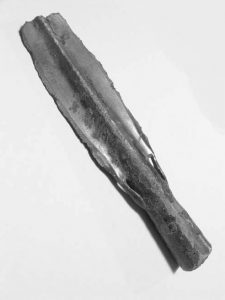 Following the April 2005 meeting, Sandy Boyd enquired about the significance of an object which she discovered more than fifteen years ago whilst walking the dog, near Ashington Wood, just to the north of Yeovil, where work to clear the course of a small stream on the east side of Ashington Lane had recently been carried out. It had been assumed to be a relatively modern artefact but recent mention of important bronze objects, such as the axe head from Wyndham Hill (described in Yeovil: the hidden history) had prompted a reconsideration. The object which Sandy had brought is shown in Plate 1. It is a well-preserved bronze spearhead which lacks its tip but has a rich green patina, is extremely well made and exhibits a fine degree of both craftsmanship and finish. Its present length is 119mm but when complete, it would have been about 160mm long. The socketed end has an external diameter of about 15mm and the blade, at its widest point, is about 26mm. However, material has ben lost from both edges of the blade, which are chipped and eroded. At either side of the blade’s base is a loop, one 4mm and the other 6mm long. The loops are contained within the profile of the blade, as it curves inwards to meet the shaft. The outer parts of the loops appear to have been forge welded to the shaft but are continuous with the blade. They are both finely finished, with a central rib and a swelling towards the join. The blade itself has central, triangular-section ribs on both sides which blend smoothly with the socketed shaft.

The design of the spearhead suggests that it dates from the middle/late Bronze Age, around 1,000 BC. This is base on a comparison with the drawing of a spearhead from Loxton, Weston-super-Mare, which occurs in Ian Colquhoun’s article ‘Bronze Age Metalwork in Somerset: A Catalogue of Stray Finds’ (Proceedings of the Somerset Archaeological & Natural History Society, 122, (1978), p.94). Bronze Age spear heads are not uncommon finds from prehistoric sites but the only other recorded example from the immediate vicinity of Yeovil was found at Marston Two Elms in 1881 (also noted in the June of the Newsletter). In fact, it ranks alongside other major Bronze Age metalwork discoveries of the area, the Wyndham Hill axe head and the gold torc from Hendford Hill. In the quality of workmanship, it is comparable with the most remarkable local Bronze Age find, the South Cadbury shield. The Ashington spear head is an important addition to our understanding of local prehistory.