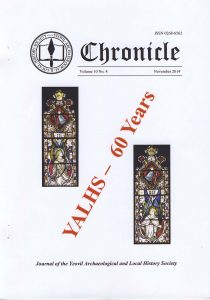 The excavations at Lopen and Dinnington 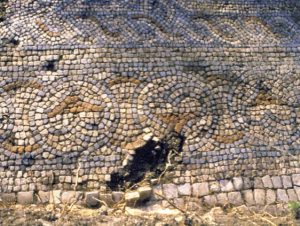 The sites of two Roman villas, at Lopen and Dinnington, to the west of Yeovil were subject to archaeological investigation 12 to 13 years ago. The Lopen villa was discovered accidentally in the autumn of 2001, when part of a mosaic pavement was uncovered during construction of a new access road close to Bridge Farm. Subsequent rescue archaeology lead by Alan Graham revealed significant remains of a Roman villa. The archaeological deposits were very close to the surface and evidence of eight rooms was uncovered, including a fine mosaic pavement datable to c.360 AD. From the pottery found, it had been occupied from the 3rd until the early 5th century AD. Evidence for the presence of the Dinnington villa was indicated by crop markings in the dry summer of 1976. Trial trenching in 2000 uncovered a tessellated floor, immediately beneath the plough soil and this led to a visit by the Time Team in May 2002 (see Chronicle Vol 8 No. 4 p.94) but as they only had three days digging, the evidence found was limited. However, the presence of a hypocaust and another mosaic floor were indicative of the villa’s importance.

YALHS member and retired professional geologist, Hugh Prudden has had the opportunity to examine stone samples excavated from both villas, including individual tesserae from the mosaics and in this account summarizes the findings.

Under each description there are two sets of terms used to describe rocks:

The following is a summary of the various rock types associated with the Lopen and Dinnington sites.