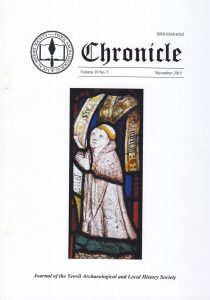 The Death of Henry Turberville

What brought this rather eccentric man, who lived most of his life in Devon, to Yeovil where he met his mysterious death? Henry was born in the rectory at Longworth, Berkshire, where his father was curate-in-charge. He was a year older than his famous brother R.D. Blackmore (Plate 161), author of Lorna Doone and other Exmoor tales. When he was still a year old and his brother only 3 months their mother and sister died of typhus. It must have been a great tragedy in that parish as the local doctor and servants in the house also died. After this their father moved back to a parish in Devon where he had several relatives including his father and a brother who also had parishes on Exmoor. The boys were sent to Wales to be looked after by their mother’s sister.- It was while living in or visiting Wales that they heard stories of the Turberville family who lived nearby and were descended from Welsh princes. Little is known of Henry’s schooling but it was probably similar

to his brother’s, which was boarding school at Blundell’s, Tiverton and then to Oxford University. As far as is known Henry did not earn money as, although their father had little, both boys were left money by relations and Henry used his to buy property and land to bring him an income. In the 1851 census he is living in Bradiford, near Barnstaple, a lodger with a farmer at Hume’s Cottage. He is listed under his birth name of Henry Blackmore. By 1871 he had changed his name to Henry Turberville and is listed as gentleman – landed proprietor – age 47. He claimed he was a descendant of a Turberville poet and had severed ties with his family.

Some time between the two dates he fell out with his family and had little contact with them. He was renowned for being eccentric and had an interest in Shakespeare, the Roman Catholic Church, science and was a follower of Charles Bradlaugh, who was a free thinker and gave lectures in various towns and cities, and was M.P. for Northampton. He was a militant politician who refused to take the oath on the Bible. One person who had met Henry at the Hall of Science, stated that he had a bee in his bonnet, loved to talk of poetry and had an intimate knowledge of Shakespeare. Henry often travelled and stayed at the Three Choughs in Yeovil, possibly it was a convenient stop on his journey back to Devon. During his stays in Yeovil he became friendly with Thomas Maggs who in 1871 is listed as Pharmacist and Dentist having a business in the Medical Hall on The Borough. Thomas, who was 47 in that year lived with his wife, four sons and four daughters. He trained two of his sons to be pharmacists and dentists and also taught apprentices. Henry Turberville became engaged to Elizabeth, one of Thomas Maggs’ daughters. He was 53, about the same age as her father, and Elizabeth was 23.

As Henry had money to leave he was in the habit of making wills in favour of a person or project that occupied his interest at the time. The first will known was to Henry Essery, a shoemaker in Barnstaple. The second was to create a statue to Shakespeare and the third left a substantial sum to Charles Bradlaugh, the free thinker. His last will was made on July 21st 1875 leaving all to Thomas Maggs.

On the evening of 16th August that year, Henry dined with the Maggs family. He returned to his room at The Three Choughs in great pain. Thomas Maggs was called and gave him several remedies but Henry grew worse. He declared to hotel staff that he had been poisoned so Mr. and Mrs Sharland, the proprietors, called in Dr. Russell Aldridge but despite all efforts Henry died a very distressing death the next morning. The inquest was opened in Yeovil on 19th August and adjourned until 30th for further medical evidence. The doctor declared Henry had taken cyanide in his presence but medical evidence showed that, though his lips and mouth were charred, none had reached his stomach. The verdict stated that he had taken the substance while of unsound mind. His brother, Richard, and Charles Bradlaugh disputed the verdict and the ensuing actions went on for a whole year with many acrimonious letters and accusations by Richard to the doctor involved. The local press in Yeovil and North Devon and the National papers reported the ongoing case and in August 1876 it came before Lord Chief Justice Coleridge. Richard’s claim to be the sole beneficiary was turned down and Henry’s £20,000 estate was divided thus:- R.D. Blackmore £2,000; Charles Bradlaugh £2,500; Thomas Maggs £15,000; Henry Essery, the shoemaker £500.

Richard Blackmore probably lost all or most of his legacy as he was issued a writ by the doctor and damages were settled out of court. The Maggs family stayed on in Yeovil at least until after 1881. After Thomas retired to Hove, one of his sons, Frederick, stayed in Yeovil as a dentist, lodging at 31 Hendford Hill in 1891 and in 1901 he is still a dentist but has his own house at 15 Princes St. His younger brother moved to the London area where he practised as a dental surgeon with addresses in Hanover Sq, Bromley and Upper Wimpole St. Thomas died in 1900 and his estate valued at £7,908 was left to his two sons. Elizabeth, who was engaged to Henry Turberville, was married on 4th September 1877 to Edwin Augustus Barnett at St. Mary’s, Tyndal’s Park, Bristol who was a wine merchant and she lived comfortably in Bristol with her husband, daughter and servants. She probably met her husband through her aunt and uncle who lived in Union St, Bath. The uncle is listed in the 1861 census as cook, confectioner and wine and spirit merchant.

Despite the verdict of suicide, Henry was buried in the churchyard at Charles on Exmoor with the inscription on the tombstone:

O that they were wise, that they understood this, that they should consider their latter end! Deuteronomy 32.29