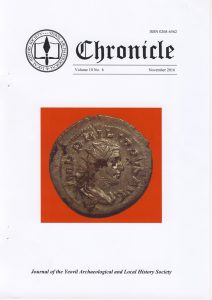 Front Cover Illustration: A silver radiate-coin of the Roman Empoeror Philip I, minted in 248 AD. It comes from the hoard discovered at Yeovil Recreation Ground in 2013.

This article came from the Chronicle published November 2016. Pages 191-2 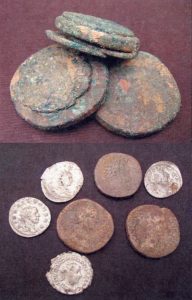 Plate 189 A few coins from the Yeovil Hoard, before and after cleaning

A hoard of Roman coins was discovered in March 2013, while ground works were being carried out on behalf of South Somerset District Council at the Yeovil Recreation Centre, in Chilton Grove. The hoard was spotted by Mark Copsey, the driver of a bulldozer, who noticed a greenish spread that appeared to be coins. He stopped machining and gathered together as many coins as he could find, together with some sherds of the pot that had contained them. Mr Copsey, who is from Suffolk, was aware that a find of this nature should be reported. Accordingly, he notified the Suffolk Portable Antiquities Scheme Finds Liaison Officer who in turn reported it to the Somerset Historic Environment Service. Following a site visit by a member of the Historic Environment Service team, AC Archaeology were contracted to carry out fieldwork, in order to discover more about the context of the hoard and establish whether there was any other archaeology in the vicinity. A metal detector survey was also carried out to recover coins dispersed by the bulldozer. This work revealed that the hoard had been buried in a small pit which lay on the edge of a previously unrecognised Romano-British settlement. The bottom third of the pottery container was still in situ in the pit and was removed archaeologically.

The South West Heritage Trust expressed an interest in acquiring the hoard, through the provisions of the Treasure Act. The Treasure Valuation Committee met on 16 May 2016 and recommended a valuation of £53,500. South Somerset District Council generously waived their right to half the reward leaving the Trust to raise £26,750 to acquire the hoard. Grant applications have been submitted to the ACE/V&A Purchase Grant Fund, the Art Fund and Headley Trust.

The hoard consists of 3335 base silver coins of the second and third centuries AD, of which 165 are denarii (the principle Roman denomination during the first two centuries of Roman Britain) and the rest are known as radiates (probably a double denarius). Radiates were first introduced in AD 215 and took over as the main denomination during the course of the third century. In addition, there are four large brass coins of a denomination known as a sestertius. The latest coins are issues of Victorinus (AD 269-271). The small number of Victorinus’s coins indicates a date of burial for the hoard early in his reign. This was a time when Roman Britain was part of a group of rebellious provinces, under the rule of a rival ’emperor’ to the one in Italy. This breakaway territory is often called the ‘Gallic Empire’ and Victorinus was one of its emperors. 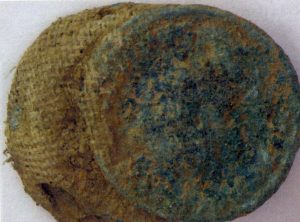 The work of cleaning and conservation was undertaken by Pippa Pearce, Senior Conservation Officer at the British Museum (Plate 189). An
unusual feature of the hoard is the presence of textile. It appeared that at least some of the coins had been wrapped in piles or rolls (Plate 190). The site was not waterlogged, so it is likely that the textile was preserved as the result of a microenvironment created by the corroding coins, within their pottery container.

The hoard contains a number of unusual and interesting coins. For example, there is a series with naturalistic depictions of exotic animals and birds including elephants, hippos and lions. These coins were struck in AD 248, during the reign of Philip I, to mark the 1000th anniversary of the founding of Rome (Plate 191). The festivities were magnificent and included spectacular games, and theatrical presentations throughout the city. In the Colosseum, more than 1,000 gladiators were killed along with hundreds of exotic animals including hippos, leopards, lions, giraffes, and one rhinoceros. Philip I was the first Arabian emperor of Rome. 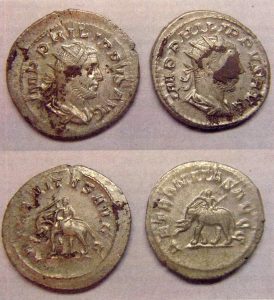 The range of emperors and empresses depicted is unusually wide, in part due to the turbulent history of the time with many usurpations. In this period the portraits on coins are naturalistic. Those represented include Orbiana who was famous for her beauty and also several very powerful empresses who had great influence on the politics of the time such as Julia Domna, wife of Septimius Severus, and Herennia Etruscilla, who reigned as regent for her son Hostilian.

The Empire was in turmoil during the reign of Valerian (AD 253-260). In AD 260 Valerian was captured during a campaign against the Persians. An early Christian source maintained that for some time Valerian was subjected to great insults by his captors, including being used as a human footstool by Shapur, the Persian king, when mounting his horse. After a long period of such treatment Valerian offered Shapur a huge ransom for his release. In reply Shapur was said to have forced Valerian to swallow molten gold, after which he was skinned and stuffed with straw and displayed as a trophy in the main Persian temple.

All Photographs are by kind permission of The British Museum