The Wessex Battalion of the Boys’ Brigade held a Demonstration and Inspection in Yeovil at the County Show Field in West Hendford on Easter Monday 13 April 1909.

The Western Gazette sets the scene:
‘In connection with the Wessex Battalion of the Boys’ Brigade, a demonstration and inspection of the whole of the Companies by Major-General Sir John Moody, took place at Yeovil on Easter Monday. Nearly 600 lads took part, and altogether the day was a red letter one in the history of the Boys’ Brigade in the district. There was, however, a change in the beautiful weather which had been experienced the previous few days, a cold wind prevailing, and in the morning rain fell rather heavily.’

Happily however, the weather cleared in the afternoon, and did not in any way interfere with the day’s arrangements. Early in the afternoon, the Battalion paraded in the Town Station Yard, where under the command of Captain R N Southcombe of the 1st Stoke-under-Ham Company (as the Western Gazette described the village in 1909) who was also colonel of the Battalion, the 600 youngsters and their officers carried out several drill movements and then marched off for the County Show Field in West Hendford. At the head of the column was the Battalion Bugle and Fife Band followed by the Companies from Yeovil, Sherborne, Stoke-under-Ham, Bridgwater, North Petherton, Milborne Port, Castle Cary, Ilminster and Dorchester. 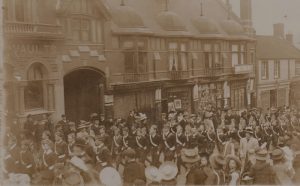 The Battalion marching up Middle Street to the County Show Ground. Photograph from the Jack Sweet collection 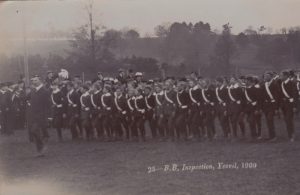 The Battalion parades on the Ground. Photograph from the Jack Sweet collection

On reaching the Show Field and watched by a large crowd, the Battalion formed up into line and were inspected by Major-General Moody, Colonel Marsh and Surgeon-Major Marsh. The Battalion then formed into quarter columns, carried out various drill movements, and marched past the Major-General to form once again into line.

In a rousing speech, Major-General Moody told the Battalion that they had ‘Performed most creditably, and their marching and manoeuvring was excellent! The Boys’ Brigade movement had grown from the 30 lads in 1883 to 70,000 boys today in the United Kingdom and 40,000 in the United States and the Colonies connected with the great movement.’ The Major-General stated that ‘The discipline that was engendered in the Boys’ Brigade was most valuable to the boys now and would be all their lives. He always told employers of labour that members of the Boys’ Brigade were worth 25 per cent more than the ordinary boy in the street.’ 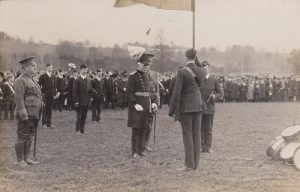 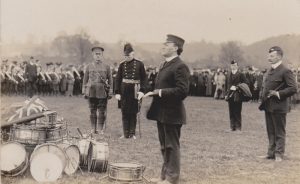 Following his address, Major-General Moody presented the Battalion colours, a gift from Mrs Southcombe, to the 1st Bridgwater Company as the smartest all-round company. The Battalion then reformed into column and marched back into the town for tea at the Liberal Hall.