At about half-past ten on Monday morning, 3 September 1917, Flight Sub-Lieutenant John Emyr Thomas of the Royal Naval Air Service, an Air Department ferry pilot, took off in his Avro 504E two seater biplane from Westland’s airfield en-route for the Royal Naval Air Station Hendon. Accompanying the Flight Sub-Lieutenant in the observer’s seat behind him, was Mr Robert Norton, Westland’s commercial director, on his way to a meeting with Air Board in London.

The take off was normal, but at about 300 feet, the aircraft banked sharply to the left and nose dived into a field near the bridge over the Yeovil to Taunton railway line at Bunford. Rescuers from the factory arrived at the crash within minutes and found Mr Norton pinned under the aircraft’s fuel tank, still alive but badly injured. Mercifully the plane had not caught fire, the injured man was carefully extracted from the wreckage and rushed to Yeovil Hospital in the Red Cross ambulance which had now arrived on the scene. Sadly the young Naval pilot was found to have died in the crash. 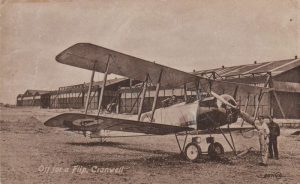 An Avro biplane. Flight Sub-Lieutenant Thomas carried out his flying training at Cranwell. Photograph from the Jack Sweet collection

The Inquest into the death of 23 years old, Flight Sub-Lieutenant J E Thomas before Mr E Q Louch, the Coroner and his Jury, was held on 5 September, The first witness was Mr Percy Warren, the Westland assistant manager, who stated that the Avro biplane had flown down to the factory from Hendon, on the Monday previous to the accident. The officer had taken a new plane back, and left instructions for the Avro to be returned by another pilot. Flight Sub-Lieutenant Thomas had arrived at the works early on Monday morning for this flight, and the witness stated that he had accompanied the officer and Mr Norton to the aircraft. There had been some trouble starting the engine, but it was running well when the Avro taxied out and took off. Mr Warren stated that the aircraft had flown some 600 yards and risen to a height of about 300 feet when it banked to the left and got into a vertical spin until about 100 feet off the ground when it took a nose dive. With other employees he had rushed to the scene of the crash and found the aircraft a total wreck. Mr Warren went on to say that at no time had the flight sub-lieutenant expressed any doubts about the condition of the aircraft prior to take off.

Squadron Commander Evill, DSC, Royal Naval Air Service, representing the Air Board, testified that the deceased officer was fully qualified to fly the Avro504E biplane, and was in fact flying an aircraft easier to handle than those he was used to. The squadron commander believed that the pilot had been over-confident with the machine and had made an error, which if he had been flying higher, he might have corrected. Flight Sub-Lieutenant Thomas had been used to more powerful aircraft, and had been too low when he banked. The witness went on to say that Mr Norton, the passenger, who was too ill to attend to give evidence, had told him that the engine was running perfectly at the time, and thought the aircraft had been banked too steeply.

John Hardie, an engine mechanic employed by the Royal Aircraft Factory at Westland, took the stand, and testified that when the engine had failed to start, a short circuit had been found and rectified, afterwards it had run smoothly. On the morning concerned, Flight Sub-Lieutenant Thomas had asked if anyone knew anything about the engine because he had flown in similar machines but had no experience of this one. Mr Hardie stated that – ‘Lieutenant Thomas had no doubt flown this type of machine, but with a different engine – one of lower power. Deceased got out two fire extinguishers from the hangar – an unusual thing for a pilot to do – he having heard no doubt, that the type of engine sometimes caught fire. He also asked for the seat to be packed so that his feet could more easily reach the rudder-bar, and some sacks were brought, which brought his feet forward. When he got off the engine was running well. He told witness that he did not like the type of engine. Witness had seen a good many of this type of engine in that particular type of machine. When it left the ground the machine seemed all right, and in witness’s opinion, deceased “pushed up the nose” of the machine too much in climbing. He had seen the machine arrive at the works and the engine had been running well. It was of the rotary type.’

John Hardie was the last witness, and in his summing up, the Coroner stated that in flying an aeroplane, a good deal must be left to the skill of the pilot upon whom everything depended. – ‘When a man was in the air at a considerable altitude, it was impossible to tell what he was doing, or whether he came to grief through an error of judgment or a temporary stoppage of the engine, or defect in the engine or machine. There was the opinion of the commander that the sub-lieutenant was flying in over-confidence, and any evolution he could have made in a more powerful machine might not have come off in the one he was flying. They were assured that the machine ascended well. What caused the accident was a matter of speculation, but the machine came into a position which brought about a nose dive, and crashed to earth, causing injuries to the sub-lieutenant which cause his immediate death.’

The Jury found a verdict of ‘accidental death, sustained whilst flying a Service biplane, which fell, the accident being probably due to over-confidence of the deceased in flying.’ They also added that they were of the opinion that officers should not be called upon to fly machines with the engine of which they were not conversant.

The Coroner stated that he would send the Jury’s opinion to the Air Board, and closed the Inquest by expressing his sympathy to the relatives of the late officer who had lost his life in the execution of his duty just as much as a soldier or sailor of the King lost in direct action. 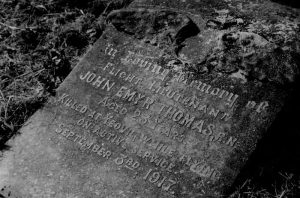 The body of Flight Sub-Lieutenant John Emyr Thomas was taken under the escort of the Yeovil Volunteers and two Royal Naval Air Service officers, from the Hospital to the Town Station on its last journey home to rest in the Rhewl Calvanistic Methodist Chapel Yard, near Ruthin in Denbighshire.