This article came from Chronicle published May 1983. Page 53

The mill, which is on the River Yeo at the south-west boundary of the town, is marked on the 1574 map of Sherborne, but there was probably a mill on the same site in medieval times. A fresh structure was built between 1720-40, probably on the earlier foundations. It is the remains of this building which is now the subject of a restoration project undertaken by pupils of Sherborne School in conjunction with various local societies and individuals.

The mill was owned by the Digby Estate, and was let on a yearly basis to various working millers, the last tenant giving up in 1957, the rent then being £85 p.a. By this time the adjoining miller’s cottage, the mill house, and machinery, had become so dilapidated that it was not a financial proposition to repair -them, so they fell. more and more into decay, and the mill pond became silted up. The Wessex Water Board bought the site and buildings, which gave them control over the flow of the river, and used the land as a depot for plant and machinery.

On a Sunday afternoon in January 1976, a group of boys from Sherborne School, out for a walk, noticed the derelict buildings. They could hardly be seen due to a thick growth of brambles and ivy, with crumbling walls, and rotten roof timbers. However, these remains aroused the interest of the boys, who thought something should be done in the way of a clearance of the site to avoid. further decay and pillage of material from the fabric. A letter was written to the Sherborne Society and one to the ‘Western Gazette’, suggesting some measure of preservation, and the response was.so good that it eventually led to the ‘West Mill Restoration Society’ being formed, and later being registered as a charity.

Clearing of the site revealed the full extent of 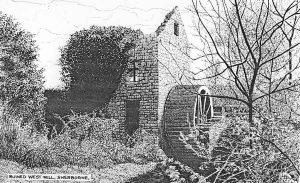 the ruination, and it became evident that in addition to enthusiastic unskilled labour, much skilled labour and costly materials would be needed to complete even a basic restoration. It says much for the enthusiasm of those connected with the project that a large amount of the money needed has been raised by means of gifts from private individuals, many fund-raising events organized by the school, and grants from Dorset County Council, and various charities. Cash prizes have come from the entries in ‘Shell’s Better Britain’ competition, and grants from Dorset’s Silver Jubilee Trust. Bartletts of Yeovil have loaned scaffolding, and apprentices at Yeovil College have made window frames and doors. Other students at Yeovil College have made repairs to the ironwork of the wheel – made in 1877. Many local firms and craftsmen have also done work and given their time to supervise work carried nut by the boys. At the last ‘Open Day’ during ‘Commem’, in the summer of 1982, the wheel could be seen turning under power of water from the cleared mill-pond, the roof, floors, and walls are now sound, and a lot of the machinery cleaned up ready for installation. When the miller’s cottage, with its baking ovens, is completed, it is hoped to use this as a site museum.

No doubt there will be more progress to be seen at the next ‘Open Day’ during the 1983 ‘Commem’ Week.

(Your editor visited West Mill in the Spring of 1977, before anything had been done to clear the site or any restoration work commenced, and made a pen and ink drawing, which appeared on the Western Gazette pictorial ‘Wall Diary’, or calendar, for 1978.- If it has been possible, this will appear as an accompanying illustration. – At that time the roof timbers had completely disappeared, the interior contained only a few remnants of machinery, while the mill stones lay some yards away on top of one another.)