Yeovil Museum (now CHAC) has on display a collection of photographs of the town, some dating back to the early years of the century. These recall to the older generations of Yeovilians, many vanished buildings, streets and personalities and show the younger generation how industry, commerce, transport and life style have changed, especially during the past sixty years. One noticeable change has been the disappearance of so many inns from the town centre, a trend which began in the 1930’s and reached its climax in the 1960’s, during the period of what might be called “development fever”.

At the northern side of the town in Kingston, the “White Lion” and “Red Lion” were demolished when the new hospital, dual carriageway and roundabout were built. The “Nags Head” at the top of Reckleford disappeared, together with a terrace of houses, at the same time. In the High Street the “Fleur-de-Lys” – now part of Denners Store – was re-born in 1936 at a site on the junction of St. Michaels Avenue with Mudford Road. In Wine Street, offices occupy the site of the “Full Moon” and in Silver Street the “Half Moon” was swallowed up by Marks & Spencer. (Do many remember Vincents factory making cardboard boxes for the glove trade, which existed for many years at the back of the Half Moon, reached by the alleyway beside the Midland Bank?). In Middle Street, “The Castle” and the “George”, both picturesque but ruinous and not commercially viable, were sold to developers and demolished but the “New Inn” on the corner of Bond Street, after a short period as a restaurant, became building society offices. However, down Middle Street, below The Triangle, “The Coronation” vanished into the Co-Op and Glovers Walk development and the site of “The Railway” on the corner of Middle Street and Central Road, is now occupied by the Great Mills Store. “The Elephant and Castle” on the corner of Middle Street and Wyndham Street, opposite the “Western Gazette” building, was until recently a bookshop.

“The Duke of Clarence”, in Stars Lane, was once much used by patrons of the Palace Cinema but its site is now part of the car park. On the corner of South Street and Park Street stood “The Globe”, kept in the 30’s by Mrs. Ricketts, whose son Gerald was a prominent member of Operatic and Choral Societies. Park Street was well blessed with inns, being in what was at one time the most densely populated part of the town, having the “Riflemans Arms”, “The Golden Lion”, “The Dolphin”, which became a doss house in the 30’s, and “The Swan”, now the 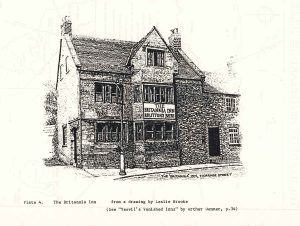 theatre. All except the Swan were demolished at the same time as the terraced houses which lined both sides of the street, in the 50’s. “The Volunteer” on the corner of Brunswick Street and Hendford was demolished when the Queensway and Hendford road scheme was made. “The Oxford Inn” on the corner of Waterloo Lane and West Hendford was converted to offices but later demolished. “The Britannia” (see pl. 4) in Vicarage Street, opposite the Wesleyan Chapel, was demolished to make way for access to the goods entrances of stores in Middle Street, and to the Vicarage Street car park. The ham stone fabric of the inn was bought by a builder who incorporated it into a house he built in the village of Ash. “The Albion” in Vicarage Street is a recent casualty in the development of that area.

Thus a total of 22 inns have vanished in the last half century, although 6 have been built to serve the increased population, of the new housing estates.