SOME OLD TRADES AND TRADERS IN YEOVIL

Looking through some old local directories, the following few random notes have been compiled in the hope they may be of interest to readers of ‘Chronicle’. The rise and decline of many trades and occupations over a period of some 160 years, reveal not only changing conditions brought about by innovations, but also a proliferation in the number of those engaged in providing services to an expanding population.

In the nineteenth century, it was not uncommon to find one person fulfilling a number of varied occupations, some appearing so diverse in nature as to be incongruous. For instance, in 1882 William Cornelius Hann of 4 Hendford, combined his fishmonger business with that of hair-cutting, and as late as 1913, J.Mitchell, who was licensee of the Britannia Inn in Vicarage Street, besides being a chimney-sweep, also hired out horses, traps, and waggonettes, and was a dealer in turf. It would be most unusual today to find a chemist who also was a dentist, as were Maggs and Son of 13 High Street in 1882, but perhaps not quite so surprising that, in 1830, John Prince Smith combined his practice of veterinary surgeon with that of a shoeing forge in West Hendford, or that, later, most of the town’s blacksmiths were also cycle dealers.

Builders frequently doubled as undertakers, and in 1907 Mrs.Box, proprietress of the Three Choughs, advertised funeral carriages for hire. In 1882, Benjamin Rowsell of 18 Hendford is shown both as an accountant and a beer and ale dealer, his stores being in Reckleford. George Raymond, also in Hendford, besides being listed as a brewer, in 1840, was also a ‘shop-keeper, or bacon and cheese factor’.

It may now be thought odd that there were two registrars in 1882, John E.Rodber being the registrar for marriages at 9 Kingston, and Joseph Whitby for births and deaths at 3 Peter Street. Also at this time, the two stationmasters at the now disappeared Town Railway Station were Frederick Maunder for the South-Western Railway, and George K.Forster for the G.W.R.

Innovations, such as the telephone, attracted relatively few subscribers at first, and in 1907 the ‘call office’ was at 2 Court Ash, Miss Adams being the only operator. In this year four establishments were listed as ‘posting hotels’, namely the Choughs, Hendford; Mermaid, High Street; Red Lion, Kingston; Globe and Crown, South Street, and there were regular horse buses, from the first two, to meet trains at both Pen Mill and Town Railway Stations.

When photography came into being, it was not long before studios were set up in Yeovil by ‘professionals’. Among the earliest to adopt the infant ‘art’, were those who until then, were carvers, gilders and picture framers. One such was John Swatridge, who is shown to have been in this business in 1840 in the Cattle Market – actually what we now call Princes Street. A photograph from his studio has an engraved device on the back reading, ‘J.Swatridge, Photographic Artist, Princes Street, Yeovil (the renaming of the Street seems to have occurred about 1850), but he is not recorded in a directory of 1882. Adam Gosney, of 39 Middle Street, in the latter year, is described in an advertisement as ‘Photographic Artist, Carver, Gilder, Picture Frame Manufacturer, Established 1866’. He drew attention to his ‘Carbon Enlargements’, which, ‘when painted in oils combine the striking resemblance of photographs, with the breadth, effect, and permanancy of first-class oil paintings’. His charges were from ten shillings to five guineas ‘framed complete’. One wonders how many such examples are still in existence. When W.Sherrell opened his studio at the Post Office at 55 Middle Street ‘(nearly opposite Mr.E.Helliar’s chemist)’ in 1894, he stated it was suitable for any weather, reminding us that the use of artificial lighting for studio portraits was unheard of at that time. He went on to say that ‘having had experience of over 20 years both as a photographer and an artist in oils, water-colour and crayon’, he was able to produce portraits of superior art qualities unobtainable by ‘mere photographers who have received little or no art training’. His speciality was ‘an artistic crayon portrait framed complete’ for one guinea. His private residence was at Hill View Villa, Sherborne Road, but his venture does not seem to have lasted for long, for he is not included in a directory of 1907.

Perhaps one of the most noticable features of the lists of tradespeople, is that of now unfamiliar Christian names, such as Onesiphorus or Josiah. Despite his name, Bishop Brabbam was not an ecclesiastic, but a woolstapler living in Kingston (1824 and 1830 directories – he also appears in church-wardens’ accounts around this time). Ince Gamis was a perfumer, hairdresser, and toy dealer, in High Street (1830,1840). But perhaps the most unusual of all were those of the well-known Dr.Colmer and his sister. The doctor, whose surgery was at 79 South. Street, was given the forenames Ptolemy. Samuel Henry, while his sister who kept a herbalist’s shop at 36 Middle Street, was named Cleopatra! Their parents were obviously classically inclined. 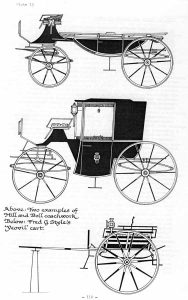 George Gracious Style, of 32 Middle Street, was prophetically named, for he was engaged in coach building in 1882, and produced some elegant designs. Mr.Sophia Hill was the ‘sole proprietor’ of Hill’s Carriage Works at 1 Kingston, in 1882, but by 1893 had been joined by, I am told, a German Bandsman named Boll, who settled here. The firm of Hill and Boll, with works in Park Road, produced some notable carriages (see Plate 13), including the bodywork for the first Yeovil-produced motor-car engine, made by H.B.Petter and his twin sons, which is now in Yeovil Museum (the engine, not the car).

Much more could (and probably will, eventually!) be written about Yeovil’s former trades and traders, but to conclude this article, here are a few of the businesses listed in the nineteenth century, which, so far as I am aware, are no longer to be met with in this town: basket-makers, brick-makers, bell-hangers, bill-posters, bookbinders, chandlers, coach-builders, coopers and turners, farriers, horse-hirers, livery-stable keepers, millwrights, pawnbrokers, registry offices for servants, rope and twine manufacturers, itinerant scissor grinders, sailcloth and sacking producers, shoe-thread manufacturers, stay-makers, straw-hat and bonnet makers, and thatchers – and these are only some! Finally, early in the nineteenth century, tinsmiths were ‘tinmen’, and those who dealt in china-ware, were listed as ‘Chinamen’!