Two Hunts and the Rebellion of 1655

In March 1655 a Cavalier rebellion broke out in Wiltshire against the increasingly repressive regime of the Lord Protector, Oliver Cromwell. The revolt was led by veteran Cavalier, John Penruddock, whose estates had been sequestrated by the Parliament as a penalty for fighting in the Royalist cause, and whose debts amounted to £1,500. In company with some 300 followers, Penruddock occupied Salisbury on Sunday the 11th March. Present in the city were Chief Justice Roll and Baron Nicholas, who were about to commence the Western Assize Circuit. The rebels dragged the two judges from their beds and led them to the Market Square where one of the leading rebels, Sir John Wagstaffe was bent on hanging them. However, John Penruddock would have none of this and saved the two men. An act which he may well have regretted as events will show. The rebels broke up the jail and Richard Manning the Under-Keeper released all the prisoners. He would also deeply regret this action in the weeks that followed.

On Monday morning the rebels marched to Blandford where they proclaimed Charles 11. Unfortunately for Penruddock and the rest of the little army, the local people with, perhaps more prudence than their Somerset cousins involved in the Monmouth Rebellion of some thirty years later, decided that discretion was the better part of valour and stayed at home. After failing to raise Dorset in rebellion, John Penruddock and his men set off for Cornwall which was reported, quite wrongly, to be in revolt and up in arms for Charles. The rebels marched to Sherborne, where they rested over the Monday night and on Tuesday morning they set out for Chard passing through Yeovil, where they halted for breath, and Crewkerne. Tuesday night was spent at Chard and on Wednesday the Penruddock rebels rode away, reaching South Molton that evening. It was in South Molton that the rebellion finally ended bloodlessly when troopers of Colonel Berry’s regiment, commanded by Captain Unton Croke surprised and scattered the little force.

Penruddock with about sixty followers was captured and taken to Exeter to stand trial. Four Judges tried John Penruddock, two of whom were Chief Justice Roll and Baron Nicholas of Salisbury’s acquaintance. Penruddock was quickly found guilty of treason and beheaded at Exeter two months later on the 16th May. Following the ignominious defeat of the rebels, some 35 were captured in Somerset and taken to Ilchester Jail where they awaited trial at the forthcoming Assizes. 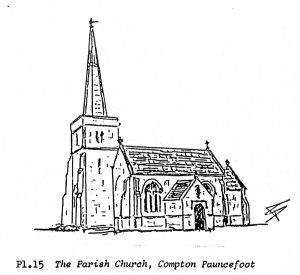 On the 25th April the trials opened in Chard and the Assize remained in session for two days, during which time five of the Penruddock rebels were sentenced to the horrific death awarded to traitors of being dragged to the gallows, hanged and quartered. The five condemned were, Captain Thomas Hunt, Mr.Pickover, Mr.Foote, one Lymington and Richard Manning, Under-Keeper of Salisbury jail. The five prisoners were returned to Ilchester Jail to await their fate, in charge of the Sheriff of Somerset. Robert Hunt of Compton Pauncefoot. Born in 1608, the son of John Hunt of Speckington, Robert had been a lawyer and entered politics as M.P. for Ilchester in 1640; he was also a Somerset Justice of the Peace. During the Civil War, Robert Hunt had joined the Cavalier

cause and was a member of the King’s Parliament in Oxford. As a result his property was sequestrated, but he reconciled himself with the Parliament and in 1654 was appointed Sheriff of Somerset. Hunt was considered to be reliable and impartial in his office and it was into his care that the five condemned prisoners were given.

The execution was fixed for Monday night, the 7th May, but during the Sunday afternoon, reprieves came from the Lord Protector for Lymington, Foote and Pickover. Cromwell also issued orders to reduce the severity of the sentence on Captain Hunt to execution by beheading only, and Under-Keeper Manning would be mercifully hanged, avoiding the other horrors associated with a traitor’s death.

On Monday, armed with the reprieves, Robert Hunt, attended by his Under Sheriff and other officers, rode to Ilchester Jail to discharge his official duties. However, no one other than Robert Hunt had knowledge of the reprieves and when he arrived at the Jail he immediately sent for Lymington, Foote and Pickover to attend him in his room. There Hunt told them that they could not be ignorant of why he was there as this was the day appointed for their execution. He trusted they would be better prepared to meet their deaths because he had already sent them notice of the execution day. The prisoners said they were ready and Hunt told them that their sentence indeed was very sad and heavy or to use his words “Twas to bee dragged to the gallowes upon a hurdle to bee turned off cutt down alive and quartered and your quarters not to bee allowed the civility of a buriall but to bee disposed of according to his highness pleasure”,

Robert Hunt, after delivering this sentence, told the three men that he understood during the last ten days with the sentence of death looming over them, they had spent their time very piously and had “been most with God in holy dutyes”. Hunt then exclaimed that they had not sought God in vain and that God had moved the Lord Protector, Oliver Cromwell, to reprieve them not only from the ugly and cruel death which awaited them, but from death itself. He then went on to instruct the three men that they should praise and thank God as well as Oliver Cromwell for their deliverance and that he hoped that he would never have cause to see them in a similar situation again.

The feelings of the three men can only be imagined and as Robert Hunt records “and if your lookes doe not decieve mee you are every one longings to bee in your chambers in private to give God an earnest of your purposes, and I shall not keeps you longer from your sacryfice. I wishe the favor of your prince and the mearcie of God may prove a blessings to you. And soe farre ye well gentlemen”. The lesson was no doubt very salutory and after experiencing the terrors of the last few days there were at least three men in Cromwell’s Protectorate, from whom he would have no cause to fear. Alas poor Under-Keeper Richard Manning had no such good fortune and he was turned off the gallows later that evening, “dying very penitently”.

What about Captain Thomas Hunt who was also awaiting his fate in Ilchester Jail? Sheriff Robert Hunt had a problem. The axe required to take off the gallant Captain’s head was proving difficult to find. It had to have a blade of 11 inches to carry out the task and implements of this size were not in plentiful supply. The problems in procuring the axe and the time required to build the scaffold before the Shire Hall in the Market Place at Ilchester, had delayed the execution until Thursday, 10th May.

On the Wednesday night, the eve of the execution, Captain Hunt was allowed a last visit from his two sisters. They arrived at the prison at about 10 o’clock and were shown to their brother’s cell which he shared with two other prisoners. His two companions were absent elsewhere in the prison during the visit and alone with his two sisters a daring escape was plotted. Hunt quickly changed clothes with one of the ladies and then with his other sister went down through the jail, passing two or three doorkeepers without recognition, as well as the guard and “soe past away but whether or howe it could not bee learned”. The sister who stayed behind in the chamber placed her brother’s cloak and hat on a chair and then got into his bed. When the Captain’s cellmates finally returned they thought he was asleep and took to their own beds.

Captain Hunt’s escape was not discovered until the following morning, and Sheriff Robert Hunt was given the unfortunate news. He immediately notified various important personages, including Oliver Cromwell and, no doubt, was a very worried man, particularly as the escapee bore the same name. However, the Sheriff’s record as an impartial and able administrator stood him in good stead and although a person who Hunt would not name spoke against him, the incident passed without further recrimination.

What about the two sisters of Captain Hunt? They were immediately confined to the jail and although they were brought before two Assize Courts, they were never tried. They remained in Ilchester prison for two years until they were finally bailed at the summer Assizes of 1657 and released. For Robert Hunt the escape of his namesake was an obvious embarrasment but did not affect the career of this widely respected man. He continued in office as Sheriff of Somerset for another year, served the County and Ilchester in the Parliaments of 1659 and 1660 and for the last twenty years of his life continued to play an active role in County government as a Magistrate and Deputy Lieutenant. Robert Hunt died in 1680 and was buried in Compton Pauncefoot church. Of the man who cheated the axe, the writer has no knowledge. Did he live to a ripe old age regaling and perhaps boring his friends on the escapade, or did he just disappear into the mist of history?