This article came from the Chronicle published October 1987. Pages. 10-12

To celebrate the coronation of King George the Fifth in 1911 it was proposed that, besides events to be held on the day, the occasion should be marked by a more permanent reminder. This should take the form either of the provision of a town museum, or the removal of premises in the Borough to open up the view of the church of St.John Baptist, recommended a committee set up by the Borough Council.

The Town Clerk (Mr.Batten) reported that he had received a letter from the Charity Commissioners regarding the purchase of The Chantry, which had been suggested as a possible museum for the town. The reply, he said, was not altogether satisfactory ‘as there was red tape bound up in it’, and in addition to the expense of the purchase, which would be considerable, the scheme for the museum was not so popular as he thought it should be. He thought personally that they should look further to the future and realise that a museum would be a useful institution from an enjoyable and educational point of view.

With regard to the other suggestion, it was proposed that £3,000 be offered the owners of the properties in the Borough. They already had promises of £607 10s. towards this amount, without any appeal generally having been made. The Mayor read a letter from the agent of the owners of the property who were the Misses Turner, saying they would be willing to sell the property providing the sum received was sufficient to invest in securities to bring in the same amount of income as the premises then realised. The Mayor commented that he did not see how the sum proposed to be offered could provide anything like the money that would be required to provide the income needed. One of the councillors asked what the purpose of such a purchase would be for the good of the town. Would not the £3,000 be better employed in provision of a good library or reading room? – it was a large amount to give for such property, and such a small piece of ground. Another councillor asked what had been done about enquiring whether Hendford House was suitable for a museum and free library. 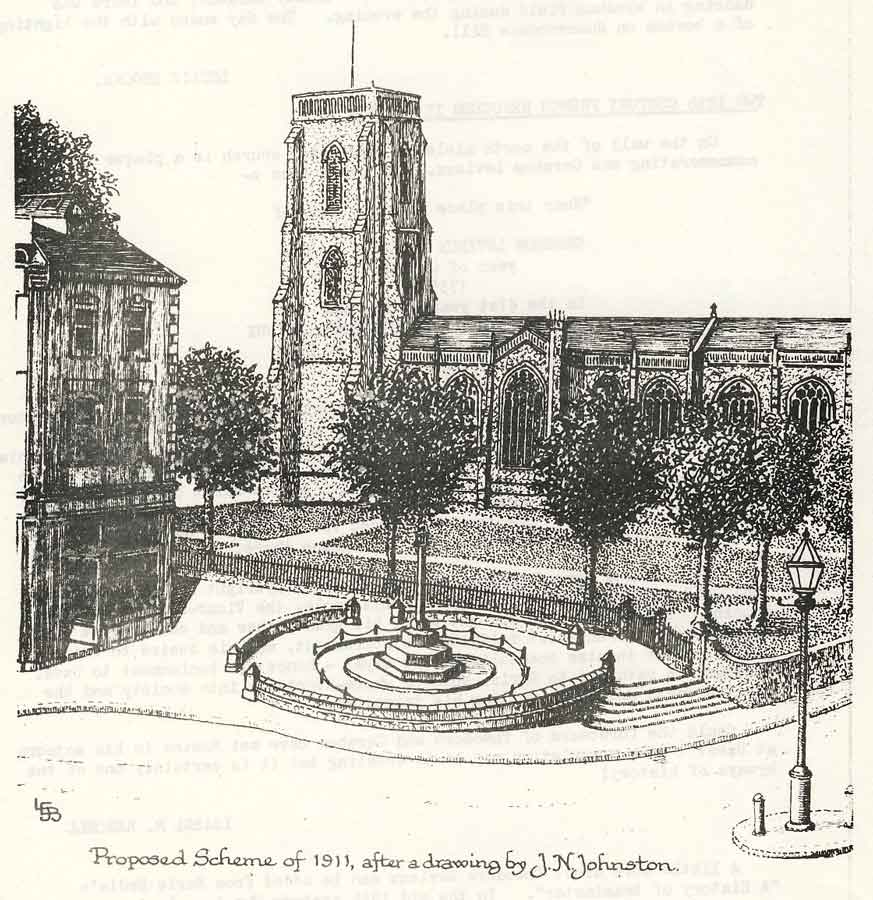 In the event, nothing came of either proposal, though there can be no doubt that the removal of the premises (now de Paula Sports) would have been a great visual improvement to the centre of the town, as is shown by the illustration in this issue, (Plate 1) redrawn from a drawing by J.Nicholson Johnston which appeared in the Western Gazette in May 1911, from which the above details have been culled. The celebration of the coronation, therefore, was confined to events held on the day, a brief description of which follows.

Church bells were rung from 9 to 10 a.m. and this wax followed by performances of three bands at different venues, the Town Band at Sidney Gardens, a Military Band in the Borough, and the Salvation Army Band at the Fountain, Pen Mill (junction of Sherborne and Lyde Roads). A service was held in St. John’s church at 11 am. and the Mayor and Corporation together with members of the local force of the Territorial Army, the Fire Brigade, Scouts, Boys Brigade, and Church Lads Brigade then paraded in the Borough where the military fired a feu de joie and the National Anthem was sung by all present.

In the afternoon, school children assembled in the churchyard to march to Wyndham Field, accompanied by bands, where they were given a tea by Mr. Henry Stiby. A grand procession and carnival, composed of members of friendly societies, athletic clubs, other organised bodies, and trades, paraded through the streets which had been decorated by individual shopkeepers. After the schoolchildren’s, there was a. public tea in Wyndham Field – at sixpence a head! – and at 5.30 p.m. Boys’ Brigades, the Church Lads’ Brigade, and gymnastic classes gave a display at Pen Mill Football Ground. Later, the Operatic Society gave a concert in the Sidney Gardens, and there was dancing in Wyndham Field during the evening. The day ended with the lighting of a beacon on Summerhouse Hill.