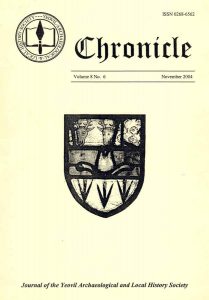 Front Cover Illustration: Painted glass shield in the west (tower) window of St Bartholomew, Yeovilton. The heraldry shows a silver shield with a blue section across the centre, which bears a gold bishop’s mitre. Above the blue section were, originally, three buck’s heads although one has been lost and the hole filled with different glass. At the bottom of the shield are three downward-pointing arrow heads. The arms are those of Thomas Beckington, Bishop of Bath and Wells between 1443 and 1465. The glass will have been made in that period. Photo. B&M Gittos

This article came from the Chronicle published November 2004.  Pages 128-9

A GLIMPSE AT THE YEOVIL SCHOOL ARCHAEOLOGICAL SOCIETY 1948-1954

In the summer of 1948, I cycled to Lufton with my father to visit the excavations being carried out by the Yeovil School Archaeological Society under the leadership of our Society’s founder and Chairman, the late Mr L C Hayward, and was fascinated. Having just passed the ‘scholarship,’ and looking forward to entering Yeovil School in the coming September, one of my early targets was to join the Archaeological Society, membership of which would continue for the next six years until I left in July 1954.

During my time at Yeovil School, with the added distractions of the Army Cadet Corps, the Field Club and School Rugby, the Archaeological Society still held pride of place, and my respect and admiration of its Director and Senior History Master, Leonard C Hayward, BA., BSc, FSA., have remained undiminished over the succeeding half century. Therefore as a tribute to the late Leonard Hayward and the School Archaeological Society, I have looked through my old school magazines – THE YEOVILIAN – The Magazine of Yeovil School and extracted the Society’s reports for all but one of the academic years during which I was a happy member. The results are set out below.

MAY 1949           The Archaeological Society has completed two term’s enjoyable work and looks forward to a long summer term with some Excavating at Lufton in August. Many meetings have been held both in and out of school and attendance at most has been good. (But will our younger members please restrain themselves when ascending church towers!).

During the Autumn Term meetings were held at Muchelney Abbey and Kingsbury, and a series of talks on Excavators and Excavations was arranged. These were illustrated by lantern slides and given by Miss Rogers (of Yeovil High School) Mr Hayward and Gillingham. Two members attended the Conference of School Archaeological Societies held in Salisbury in March.

A party of twenty went to Bristol on March 19th to see the Cathedral and an exhibition of photographs of excavations at the Museum. The Cabot tower was also visited by those members who propose to take up the profession of Steeplejack.

We are looking forward to a visit to Longleat House at the end of this term and hope the weather will be favourable for our work at the villa. One final word – we can still do with more members!

JULY 1950           During the winter a small but keen group studied prehistoric archaeology, visiting museums in Yeovil, Taunton and Dorchester. We are grateful to Col. Drew, Mr Seaby and Mr Batty for their help.

We broke new ground in visiting churches at Corscombe and the Chelboroughs, and West Coker Manor House, where Mr Nathan delighted us with an extensive tour of the house.

This term we have been excavating a third hypocaust in the bath block, and have proved by trial trenches that more buildings lie to the south. We are looking forward to fruitful results in the August “dig,” and warmly invite new (and muscular) members to join us at Lufton.

JULY 1951           The Society this year has no spectacular discoveries to report but much useful work has been done at Lufton and several excursions have taken place on Saturday afternoons, despite adverse weather. Talks have been given by Tavender, on Railways, and Davis, on Coins. Visits have been made to Catsgore, to see the Villa excavated under the direction of Mr W A Seaby, and to Ilchester where Mr J S Cox showed us his excavations and collection finds from Roman Ilchester. We look forward to further hard but fruitful work at Lufton during August and can still find room for and would welcome members to join us in our labours.

JULY 1953           The Society has not had an outstandingly active year, since after the completion of the excavations at Lufton we have tended rather to rest on our laurels, leaving the director (Mr L C Hayward) with his task of writing the final report; which is to appear in the Proceedings of the Somerset Archaeological Society this year.

During the year we have had the usual series of talks; those which were of special interest were, “On tracing my ancestors,” by Mr Rees, “Early British Burial Mounds” by Mr L V Grinsell of Bristol Museum, “British Coins” by Mr Priddle and “HMS Warspite through the Ages” by Brice. As an innovation we had a Nonsense Quiz which was a success, though the leg of many a famous archaeologist was give a hearty tug.

Of the excursions arranged this season, the “all day one” during Whit-week to Pilsdon Pen via Crewkerne was especially enjoyable, even thought the cyclists missed the motorists and eventually dined without them.

The excavating ‘bug’ has not died completely and some of us have helped Mr Hayward with excavation and observation at Perrins Quarry, Charlton Mackrell where the quarrymen have been unearthing what seem to be a simple Roman farmhouse. Some of the finds from the site were displayed in the Hobbies Exhibition and we were very honoured to be given a ticket marked SP by the judges.

If the school is to maintain the esteem with which it is viewed by the County’s Archaeological Circle, and if we are to conduct any further excavation, we must have more and (muscular) members!

JULY 1954           This has certainly been one of our most successful sessions. The standard of lectures was high, and our change of name widened their scope. (The new name was THE ARCHAEOLOGICAL AND HISTORICAL SOCIETY). Attendance at meetings distinctly improved, perhaps because of tea and biscuits!

During the Autumn Term we spent one Saturday afternoon at Cadbury, and a whole day at Bath for the annual excursion. The long awaited Lufton Report was published this year in the Proceedings of the Somerset Archaeological Society; thanks are warmly given to the Wyndham Trustees for generous financial help in its production. Talks were given on Roman Britain (a series of three by P Hawker, M G Hebditch and J Fletcher), on the Somerset Light Infantry by M Davies, and on the excavation of some Bronze Age barrows at Snail Down, Wiltshire, by P Fry, who with M G Hebditch, took part in the digging during his summer holidays.

The first meeting of the Spring Term was the very enjoyable Christmas Party. Several members spent a cold day in January examining a Roman slab grave with a well-preserved skeleton at Charlton Mackrell. Lectures were given by Hebditch on Heraldry, by Fletcher on the search for the Northern Passages to the East, by Davies on Medals, and Sweet on Werewolves, Vampires and Ghouls.

So far this term, excursions have been made to Pill Bridge, near Ilchester, to Somerton and Long Sutton, and to Muchelney Abbey and Church. The outstanding feature has been, however, a lecture by J Fletcher on the Archaeological Aspect of his recent visit to Italy.