Dr Richard Hensleigh Walter (RHW) was born in 1862, the son of Dr Walter Winter Walter (WWW) and grandson of Mr Richard Walter, all of Stoke sub Hamdon. Together, they were collectors of antiquities, particularly from the area on and around Ham Hill, for more than a hundred years. The Ham Hill-related contents of a small museum, set up by WWW at the family home in Stoke were described by Charles Trask in 1897, in his book Norton-sub-Hamdon and four years later the whole collection was donated to the museum of the Somerset Archaeological and Natural History Society at Taunton Castle (now the Somerset County Museum). The inventory compiled by the then Curator, Harold St George Gray, still makes remarkable reading and he describes the collection as one of the finest gift that the Society (SANHS) had ever received.1 The importance of these three gentlemen to the archaeological history of the area has been made clear in Yeovil: The Hidden History.2 Richard Walter published what is still a valuable plan of the hillfort, in only the fourth volume of the SANHS Proceedings.3 His son’s work on the site of the Beauchamp Castle and Free Chapel at Stoke was published in the SANHS Proceedings for 18894 and his grandson’s excavations of the Roman buildings at Batemore Barn were carried out in 1907. Richard Hensleigh Walter was, like his father before him, the family doctor at Stoke sub Hamdon and in recognition of his own contribution to local archaeology, he was elected Fellow of the Society of Antiquaries of London in 1918. He died in 1924 and is commemorated by a stained glass memorial window in the porch of the parish church (see the colour plate in Yeovil: The Hidden History).

It was against this background that a remarkable event occurred on the 4th June 2006. Brian & Moira Gittos had a chance meeting, in Shalbourne church (Wiltshire), with the Rev. Canon Stephen Trapnell and his wife, Ann. It transpired that Ann Trapnell was the  granddaughter of Richard Hensleigh Walter and that she still possessed some papers which had belonged to him. These items were briefly lent by the Trapnells and are described below. Chief amongst them is a manuscript book in the manner of a commonplace book, containing all sorts of reminiscences, poetry etc, augmented by newspaper cuttings, letters and photographs which are pasted in (see Plates 24-27 for examples taken from the book). There are also several loose items, mostly letters, one of which was the notification by the Secretary (C.R. Peers) that he had been elected FSA on 7th June 1918. The basis of the compilation of the book is described inside its front cover in the following manner,

The notes in this book are in the handwriting of my father, Walter Winter Walter, who copied them about 1897 from notes written by my Grandfather at different times between about 1797 and 1873. RHW

However, what is most interesting from an archaeological point of view is the material which was subsequently added by RHW himself. There is an index of the contents, covering some 175 pages, and this immediately conveys a good impression of the miscellaneous nature of what is contained within. It is quoted here in full.

Much of the contents are not of high literary or historical merit but they would still make a worthwhile project for publication from a social history point of view. The song ‘The Snow Dumpling: a legend of Ham Hill’ by Richard Walter is particularly amusing and the following preamble is included to explain how it came to be written.

‘By the roadside between Stoke and Cartgate just before you get to the last turning on the right Heading to Rixon there formerly (1830) stood a thatched cottage (the only one near there) in which lived Jack Hayne a pensioner, and commonly known as Captain Hayne & his wife Betty, who lived a sort of cat & dog life together.

Betty used to go occasionally to Yeovil shopping and on one occasion during a deep snow, got benighted on her way back over Ham Hill & was lost til morning.

This gave rise to the following song by my father the late Richard Walter.’

The opening stanza sets the tone:

‘I’ll sing ye a song, tis a rather rum joke
about an old woman that lived up to Stoke
who went into Yeovil for baccy to smoke
and some snuff & some tea which she put in her poke’

After each verse there is a refrain:

And this strongly suggests that it was sung to the tune of the well-known folk song The Jug of Punch.

Before Betty set off over ‘Odcombe Down’ on this dreadful night, she ‘took but a drop of gin at the Crown’. She ‘lighted her pipe to keep out the breeze’ but slipped in the deep snow on the top of ‘Hamdon Hill’ and ‘Down rolled Betty like a rat in a mill’. She became a snowball ‘as round as a dumpling’ until she was halted by a wall at the bottom of the hill. She poked a hole in the snow to let out the baccy smoke. All through this ‘terrible night’ she ‘kept puffing wi’ al her might’. The next morning her husband came by and noticed smoke coming from a snowball. The conclusion was:

He gave it a kick – Lor! How staired he
When out tumbled Betty a brisk as a bee.’

Also by Richard Walter is another song with a strong local flavour entitled Martock Races – A new song for August 23 1833. The language is far from complimentary, as can be seen from the following extracts.

With each verse, the people mentioned become more awful, reaching a climax in the penultimate stanza,

‘Come all you imps of Satan’s brood
With every thing that base is
Here your cousins & sisters and brotherhood
will meet you at Martock Races.’

It concludes with a strong warning for the innocent to stay away.

‘But all who sober, honest & true
would staint on virtue’s basis
I pray you avoid the fiendish Crew
That you’d meet at Martock Races.’

One of the more unusual newspaper cuttings refers to an aeronautical accident of 1881 but the source is not given.

On the 10th December, 1881, the military balloon ‘Saladin’ ascended from Bath and floated over Somerset. Its car held Mr Walter Powell MP for Malmesbury; Captain Templer who afterwards became head of the Ballooning Corps of the British Army, and Mr Agg Gardner of Cheltenham. It descended near Bridport and the two latter gentlemen were thrown out one with a broken leg. The released balloon sprang into the air with Mr Powell and was blown out to sea. Neither man nor balloon was ever found.’

To this RHW has added the following footnote:

‘The balloon passed over Montacute at a very low altitude & was seen by my father, who, I understand spoke to the aeronauts when they shouted to him asking for their whereabouts. Captain Templer was I believe a Chard man & known to my father, who was much shocked to hear next morning of the loss of the balloon.’

Unfortunately, the archaeological content of the manuscript is not as extensive as might have been hoped, given the interests of the people involved. However, what is included is of special interest. Apparently, when the gold torc was discovered on Hendford Hill in 1909, it was first of all taken to Richard Hensleigh Walter for his advice, as the local expert on archaeological matters. His account of this important event runs as follows.

On Wednesday July 7th 1909 Mr. E. Courtney Gardner of the Capital Counties Bank, Yeovil brought me a relic, which had been dug up a few weeks previously (May 25th 09) by a Workman named Cole who was engaged in levelling a garden attached to some houses which had recently been built on Hendford Hill, Yeovil (near one of the entrances to Aldon) immediately above the railway bridge in the garden of the 4(th) (last) house on the left (left side of occupation road from Hendford Hill). Mr. Gardner was very doubtful of the antiquity of the ‘’find’ but on seeing it I at once recognised it as a Torc, a beautiful example of later Bronze Age workmanship. It is of solid gold, weighting nearly 6 oz. Troy. (5 oz. 7½ dwt exactly) I felt the great importance of securing such a treasure for the Somerset Archaeological Society & urged Mr Gardner to at once make the best terms with the man for its purchase. With the assistance of Rev. E. Harbin Bates [sic] & others this was fortunately carried out & the relic secured to the Society on July 13th. It was formally received by the Society at a Conversazione at Wells (at which I was present) on Wednesday evening July 14th when Mr H. St. George Gray announced its purchase by the Society amidst great enthusiasm. (I visited the site of the ‘find’ with Messrs Gray & Gardner on July 19th 09, & received a visit from Cole, the finder on July 21st.)

Another object which is both illustrated and described is a decorated bowl from Ham Hill (see Plate 27). A brief letter from Arthur J. Evans of the Ashmolean Museum, Oxford, replying to an enquiry about this find is dated 13th November 1905. RHW describes the circumstances of its discovery in a caption to side and plan views of the bowl:

‘British Bowl
A black earthenware bowl was found in the spring of 1896 in black earth about 12 feet below the surface in Pilman’s Quarry (now disused) near The Prince of Wales Inn by a workman named David Dodge. For nine years the finder kept it in his cottage as a flower-pot saucer.
In the summer of 1905 he parted with it for a small sum (1/-) & shortly afterwards it came into my possession. It is now deposited on loan in the Walter Collection at the Taunton Museum. RHW’

The most intriguing photographs from an archaeological standpoint are three which show RHW, conducting visitors round the excavations at the Roman site near Batemore Barn on Ham Hill in 1907 (Plate 24). He attributes the pictures to J. Goodchild who was then the Western Gazette reporter and helpfully provides the names of the people involved. They were A.V. Cornish, W.P. O’Connor, Judge Philbrick, R.H.W. himself, Mr H.B. Batten and Miss Batten. The young lady is shown wearing fashionable clothes, not very suited to visiting an excavation and, in keeping with the period, every member of the party wears a hat. As would be expected at that date, from what can be seen of the archaeology, it was of a very rudimentary standard. 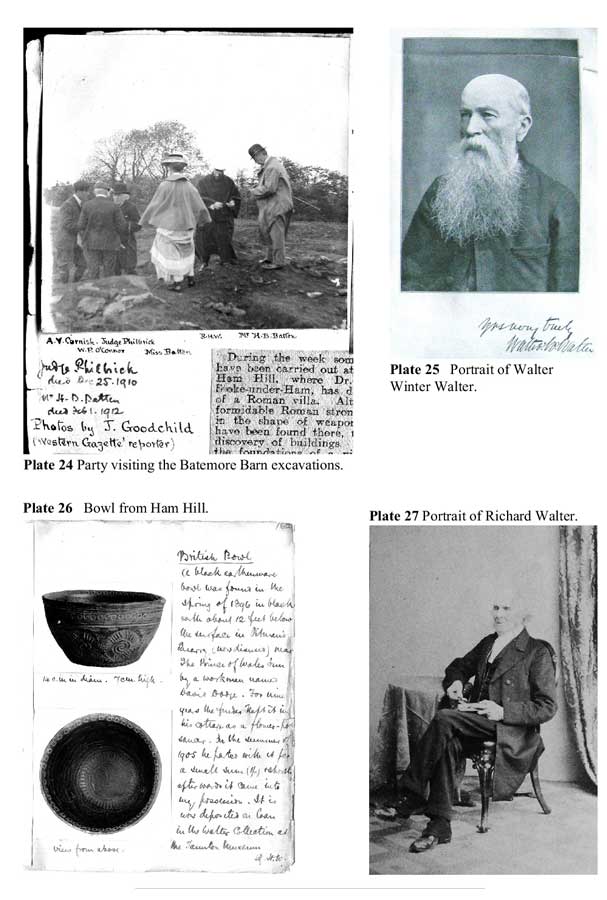 This, then, provides something of an impression of what we are calling the Walter Commonplace Book. We are extremely grateful to Ann Trapnell and her husband for allowing us to study the manuscript and produce this summary of its contents. It is to be hoped that it will be possible to ensure the long-term preservation of the original and explore ways in which it could be published, either in abbreviated form or even in its entirety.