London born, Betty Balfour was a big star of the British silent cinema screens during the 1920s, and was acclaimed as the only British star on the international scene. In 1927, the Daily Mirror named Betty as the country’s most popular star, renowned for her mixture of good humour, cheerful character and sentiment – she was called the ‘Queen of Happiness’

Betty Balfour’s career began in 1920 when at the age of 17 she appeared in the silent film Nothing Matters, but it was in the role of Squibbs, a Cockney flower girl and her adventures, that her career took off and established Betty as a national star. Betty Balfour never attempted to break into the Hollywood scene, but as with many popular stars of the silent cinema, the advent of sound in the late 1920s saw her fade from the screen. The once ‘Queen of Happiness’ died in November 1977, sadly forgotten it seems by all but silent cinema enthusiasts. 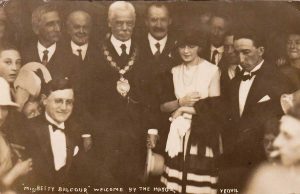 The Mayor welcomes Betty Balfour (centre) at the Palace Theatre.

On Tuesday evening, 11 August 1926, Betty Balfour appeared both on the screen in Sqibbs wins the Calcutta Cup and in person on the stage of the Yeovil Palace Theatre. The entrance to the theatre off the Triangle, was packed with fans anxious to catch a glimpse of the diminutive star as she was welcomed by the Mayor, Alderman Jabez Matthews, wearing his chain of office, and accompanied by fellow aldermen and councillors whilst the Town Band played ‘Rule Britannia’.

During the interval in the show, Betty Balfour a spoke to the audience, expressing her delight at being with them and sharing the excitement of the film. Following the entertainment, the mayor and town councillors, were her guests at a ‘social evening’ in the Mermaid Hotel.

The Western Gazette reported that Betty Balfour was working on location for a film called Somebody’s Darling at Martock, Compton Pauncefoot and Minehead, which the producers stated provided rural settings which were ‘something the Americans could not get’.