‘Yeovil’s contribution to the world-wide observance of Empire-day were of a much more extensive and elaborate character than those of former years, and truly illustrated the enormous growth of this movement, first started in Canada in 1896 for the setting apart of a day as one on which the children should be taught rightly to appreciate what they owe to the British Empire, and to recount its history and glorious traditions. The date chosen, May 24th, is a fitting one. It is the birthday of the Great Queen Victoria, who did so much for the Empire, and in whose reign it progressed and solidified far more than in any previous reign in history.’

The Yeovil Churches observed Empire Day on Sunday, 23 May, with services in St John’s, Holy Trinity and St Michael and All Angels, all of which ended with the playing of the National Anthem.

Earlier in the morning, the Yeovil Company of the 5th Territorial Battalion , Somerset Light Infantry under the command of Captain Brutton, paraded in the Borough and led by the Town Band marched ‘briskly’ through High Street, Hendford and South Street to Holy Trinity Church, the church of the company’s chaplain. In Hendford, the company was joined by the Holy Trinity Church Lads’ Brigade commanded by Captain H Christian and Lieutenant C P Ewens. The Gazette noted with pride that – ‘Wearing the scarlet of their regular brethren, and being a well-set up lot, looked a credit to any Regiment, and a shining example to the large number of youths and young men who later in the morning, whilst the National Anthem was being played, looked on indifferently, cigarette in mouth and without uncovering their heads.’

Following the service, the Yeovil Territorials and the Church Lads’ marched back to the Borough, where before a large crowd, they formed up and Colonel Marsh presented medals to Sergeant T Sartin, and Privates E Gerrard and E W Lucas, for long service, and Sergeants R S Gibbs, A January and J Perkins (Langport), Corporals A Gough, F England and H Russell. Lance-Corporal H Beare, and Privates A Cook, E Curtis and E Gillard for efficiency. Colonel Marsh then gave a rousing speech, the National Anthem was played, and the ceremony brought to a close.

Monday morning, 24 May Empire Day, dawned fine and sunny, and saw the ‘town very much beflagged, the many staves bearing the National colours in one form or another, whilst several business houses displayed strings of coloured bunting’.

At Yeovil County School in Kingston, the Western Gazette reported that there was:

‘A gathering of Governors and visitors, the Mayor of Yeovil (Alderman W. Cole) who is also Chairman of the Board, attending in his robes and chain of office. – Mr E. R. Chaffey, the vice-chairman of the Governors, offered their congratulations to the Mayor, on his return from his voyage in better health than that which he went away in. They had missed him very much in various ways and were heartily glad to see him back in improved health. – The Mayor, received with cheers, said that he felt much better than when he started and as he did not feel very strong they would excuse him from making a speech. He had just returned from one of the oldest Colonies, having been in Jamaica, and during the course of that visit he had felt prouder than ever of being an Englishman. He had visited every country in Europe, including Russia, and had always felt proud of his country. The feeling in the Colonies was entirely different, for whereas they were respected abroad, they were loved in the Colonies. He hoped that these celebrations would not include any suspicion of the jingo spirit, but that the boys would grow up to love the great Empire and would not do anything to disgrace it. A move was then made to the lawn outside, where the Union Jack was hoisted and saluted, the National Anthem sung and cheers were given for the Flag, the Empire and the Mayor.’ 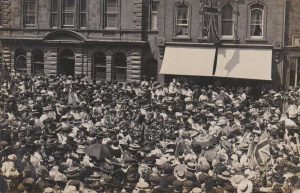 Crowd in the Borough on Empire Day 1909

Meanwhile the children of Huish, South Street, Reckleford and Pen Mill Schools were being given specially prepared lessons following which they marched with flags waving to the Borough. In 1909 things were just as likely to go wrong as now, and the Gazette commented that – ‘The lack of arrangements greatly detracted from the effectiveness of the gathering, for there being no attempt to keep the Borough clear, when the children marched in and the teachers looked for the ground which they were to occupy, they found it taken up by a crowd of people out to see the show, and who meant to see it. It was rather unfortunate, for half the youngsters were cut off from their fellow scholars by the crowd and very much mixed up in it and the singing therefore lacked cohesion.’

However, once assembled, the children sang several patriotic songs, were addressed by several local dignitaries and at the conclusion, Colonel Marsh exhorted the youngsters to ‘Fit themselves to be citizens of the Empire. Everyone one of them who did their best, was a source of strength, but the loafer who did nothing, was a terrible source of danger to the Empire.’ The Union Flag was saluted, the National Anthem sung, and to much cheering, a half-holiday was announced. For Yeovil’s children it was a day to remember.